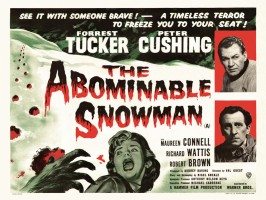 If you like the old Hammer classics, then you’ll love this.  They’re going to put a bit of a modern spin on their classic movie, The Abominable Snowman.  I don’t know about you, but I’m looking forward to seeing what they come up with.  While we wait for it come out, go ahead and read the press release:

President & CEO of Hammer and Vice-Chairman of Exclusive Media, Simon Oakes, announced today that Hammer, an Exclusive Media company, will produce a new version of The Abominable Snowman. The project is being developed by Hammer in association with Ben Holden (The Quiet Ones, The Woman in Black: Angel of Death).

In this modern take on the Yeti myth, a scientific expedition’s illegal assent up an unclimbed peak of one of the World’s most formidable mountains accidentally awakens an ancient creature that could spell a certain end for them all.

The original screenplay by Matthew Read (Pusher, Hammer of the Gods) and Jon Croker (The Woman In Black: Angel of Death, Desert Dancer) will put a modern twist on the 1957 iconic original film from Hammer’s extensive canon of work.

Simon Oakes said of the project: “The success of ‘Let Me In’ and ‘The Woman In Black’ has shown that there is an appetite for quality horror films so it is exciting to draw on Hammer’s unparalleled source material in this genre which can be reimagined and updated for a new audience.”