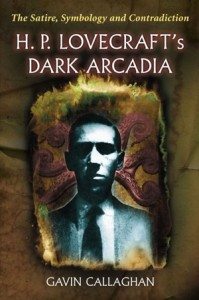 Fans of H. P. Lovecraft’s Cthulhu Mythos and other weird fiction are living in a golden age of literary criticism of the man’s work.  New collections of essays on Lovecraft and his writings have been coming out with regularity for many years.  I’ve read a fair amount of what’s out there already, and have noted that a certain kind of staleness has crept into the field.  There are certain key scholars, S. T. Joshi probably foremost among them, who are responsible for helping to popularize Lovecraft’s work beginning in the 1980s and also lending his fiction a certain amount of respectability.  We all know how little respect “genre” fiction is given by the literati, and supernatural horror fiction rarely receives more than a disdainful acknowledgement of its existence by most critics.  Lovecraft is different though: he’s undoubtedly had significant influence on pop culture and he even generates a fair amount of literary criticism.  But much of the extant analysis of Lovecraft does seem to keep rehashing the same basic themes, essentially treading the same well-trod ground.

Gavin Callaghan’s H. P. LOVECRAFT’S DARK ARCADIA: THE SATIRE, SYMBOLOGY AND CONTRADICTION adopts a very different approach.  DARK ARCADIA is a collection of six interconnected essays, three long ones – on Lovecraft’s use of Roman and Greek symbology and themes; the image of the father and paternal figures; and the mother and feminine figures – and three shorter ones focusing on narrower topics: images of bees and apiaries; the concept of the “moon-ladder”; and the coda in “The Shadow Over Innsmouth” and Lovecraft’s beloved cousin Phillips Gamwell.  There’s a great deal more covered here than that thin list would imply, as these essays are pretty far-ranging.  I also certainly appreciate Callaghan looking at some of Lovecraft’s more obscure works that rarely receive any analysis, including “The Green Meadow,” “Medusa’s Coil,” and “The Moon-Bog.”

So, in the growing field of Lovecraft studies, what exactly does Callaghan contribute?  First, Callaghan explores the many classical allusions to Greco-Roman myths found in Lovecraft’s work.  That is valuable and mostly hasn’t been done before.  Callaghan also seeks to explore the satirical possibilities of Lovecraft’s work.  That too is a welcome study, since most of the scholars examining Lovecraft take it all just a little too seriously at times, even though I’m not entirely convinced of Callaghan’s arguments here.  Perhaps most important for Callaghan is the tool of literary psychoanalysis (mostly Jungian here) to explore Lovecraft’s development as a way to examine the tropes he uses and keeps returning to in his fiction.  I’ve always been more than a little skeptical about using psychoanalysis to examine authors and – even worse – fictional characters, but Callaghan at least offers some interesting speculation here.  I think that one of Callaghan’s most valuable contributions, though, is his attempt to overturn the conventional wisdom that has come to dominate Lovecraftian scholarship (the “Joshian” school of thought) that emphasizes the cosmicism found in Lovecraft.  It’s hard to avoid that: Lovecraft does, after all, often write about a fundamentally uncaring universe and incomprehensibly powerful alien beings who take no more notice of human affairs than we would notice a single small ant colony in the jungles of Borneo.  But Callaghan argues that the cosmicism everyone points out in Lovecraft is almost incidental.  What we see of cosmic elements are, to Callaghan, Lovecraft’s efforts to work through his troubled past and psyche, mostly revolving around his feelings toward his parents.  What remains of Lovecraft’s fiction, Callaghan suggests, is mostly a set of far more conventional, almost gothic horror tropes and scenarios in new guises.  We keep returning to Lovecraft’s cosmicism because, Callaghan suggests, everyone “knows” that that’s what Lovecraft was all about, so that’s what we all think.  But this very well may be simply the popular consensus found in secondary sources, rather than what a truly fresh reading of Lovecraft’s original work might uncover.  Callaghan argues that if we really think about it, the horrors in Lovecraft’s work are actually pretty familiar tropes for his time: miscegenation, bestiality, sadism, cannibalism, infanticide, necrophilia, incest, paganism, witchcraft, vampirism, and lycanthropy (these terms applied broadly).  Again, I don’t know that I’m entirely convinced by that argument, but I’m very glad that Callaghan has made it.  This is a work of Lovecraftian literary criticism that can’t be ignored; it can be dissected, poured over, and argued against, but it can’t simply be dismissed, and that’s a valuable contribution indeed.

I know that many Lovecraftian scholars and analysts are virtually obsessed with Lovecraft’s racism (I mention this because it’s become one of my pet peeves).  You can’t find an analytical piece on the man’s writing from the last ten or fifteen years that doesn’t devote a lengthy section to the subject; it has become de rigeur.  Lovecraft was a white New Englander born in 1890.  Of course he was a racist by twenty-first century standards.  (So was Abraham Lincoln, for that matter.)  Lovecraft’s era was a time in which Irish and Italian immigrants to the United States were only grudgingly accepted as “white” by most – but still not all – Americans.  Lovecraft’s “xenophobia” and disdain for non-white ethnicities and races, which does occasionally pop up in some of his fiction output, is neither unsurprising nor interesting to me.  I would vastly prefer that much more interesting themes about Lovecraft;’s writing be explored, but your reaction will likely vary.  In any case, if you want more of that sort of thing, there’s some of that here, but it doesn’t overwhelm and distract.

DARK ARCADIA is not without its flaws and it’s certainly not for all readers.  If you’re mostly a casual fan of Lovecraft and Cthulhu, avoid DARK ARCADIA (and literary criticism in general).  If you’re not particularly familiar with Lovecraft’s work, this isn’t a good place to start.  If you’re at all interested in exploring some of Lovecraft’s work on a deeper level, however, you should check out DARK ARCADIA.  You might not come away agreeing with Gavin Callaghan, but you won’t regret hearing him out.