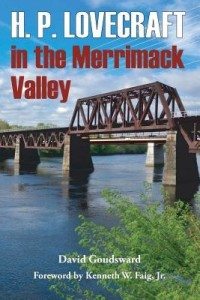 It’s no secret that I’m a huge fan of Lovecraft and his work.  The man created a whole new era of horror and helped usher in the genre as we know it today.  Because of his influence, many authors and fans have sought to go deeper into the man and his uber-imaginative mind.  Author David Goudsward takes this ambition one step further and delves into the physical influences that played a part in some of Lovecraft’s stories.  H.P. LOVECRAFT IN THE MERRIMACK VALLEY takes the reader on a historical journey through key locations in New England and discusses how these places found their way into Lovecraft’s work, as well as the people that touched his life along the way.

If you are not familiar with H.P. LOVECRAFT IN THE MERRIMACK VALLEY, here is the plot synopsis courtesy of Hippocampus Press:

For decades, David Goudsward has been a leading authority on the obscurer historical and topographical corners of his native New England. In this lavish and detailed treatise, he has written the definitive treatment of Lovecraft’s connections with the Merrimack Valley of coastal Massachusetts and New Hampshire. Goudsward traces Lovecraft’s initial visits in the 1920s to such towns as Newburyport, Haverhill, and Hampstead, where he met such colleagues as Charles W. “Tryout” Smith, Myrta Alice Little, and Edgar J. Davis. Later visits clearly inspired many of the topographical features in such tales as “The Shadow over Innsmouth” and “The Shadow out of Time.” Goudsward has made a profound study of Lovecraft’s letters and other documents in tracing the Providence writer’s movements in the area and the impressions he drew from it. This book is lavishly illustrated with dozens of photographs of the locale, including many vivid period snapshots that show the towns and other landmarks as they would have been seen by Lovecraft himself. Goudsward also treats the possibility that Lovecraft visited Mystery Hill, a megalithic site that some scholars believe inspired “The Dunwich Horror.” H. P. Lovecraft in the Merrimack Valley is an exhaustive treatment of a subject that has rarely been discussed before, but that is of crucial importance to H. P. Lovecraft’s life and imagination.

I can honestly say I’ve never read a work as exhaustively researched as this one.  Goudsward uses letters, journal entries, and essays written by and about Lovecraft as the basis of his research, and he takes great care and effort to ensure the reader understands the context in which they are used as well.  The result is an informative and entertaining read.

H.P. LOVECRAFT IN THE MERRIMACK VALLEY is written well and flows nicely.  Although it is non-fiction, the book does not read like a stale textbook.  Instead, Goudsward presents the information as matter-of-fact but adds a slight hint of dramatic effect in his writing.  This style allows for complete immersion into the book.

H.P. LOVECRAFT IN THE MERRIMACK VALLEY is a huge win for me, and I highly recommend it to anyone seeking a better understanding of this legendary author and his life.