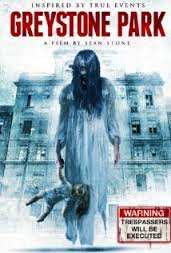 Oliver Stone is, in my opinion, one of the top ten finest filmmakers working movies. Although he has been in a slump with his recent films, he has given us some of the finest and most important cinema in the history of film. His son, Sean Stone, is now a filmmaker and has begun his career with a horror film called Greystone Park. As far as Stone Jr. being a great filmmaker, the jury is still out.

Greystone Park is another in the long and tired horror sub-genre of the “found footage” film. This overused style allows filmmakers working on low budgets to use cheaper cameras while applying the hand-held shooting technique. In these types of films, there are usually no tracking shots and most of the “action” is blurred due to the fact that the actor holding the camera is fighting with or running from whatever the monster of the piece may be. The Blair Witch Project started the “found footage” craze and still holds the prize for using it best.

This film concerns three amateur ghost hunters, played by Sean Stone, Antonella Lantinni, and Alexander Wraith, who break in to an abandoned psychiatric hospital and try to encounter the ghosts of the former inmates whom legend says still haunt the halls. As one character states, “Anyone who goes inside will go mad.” This, of course, fuels our leads to go on their ghost hunting expedition and, yes of course, film their adventure.

There is an opening sequence of a dinner party with our main three characters and Stone’s father, played by his actual daddy Oliver. Oliver Stone’s character tells the ghost story of a woman in the woods with a white face and green eyes named Crazy Kate who steals the souls of any who encounter her. The dinner party serves as a jumping off point of sorts and tries to set the gloomy mood for the rest of the film. It is an appropriately ominous scene. According to Sean Stone, this is how he was introduced to Alexander Wraith. It happened at a dinner party thrown by his father and the two became fast friends when they bonded over their love of ghosts. Actor Wraith actually goes ghost hunting in his personal life, which led to the creation of this film.

Once they get into the hospital, which is located at the end of a long and dark wooded road, things begin to happen almost immediately. This is where my thoughts on the film began to bounce back and forth.

The hauntings start as we would expect, with sounds in the distance and the glimpses of “shadow people” roaming the halls. These scenes are handled well and keep the creepy mood set by the opening dinner party conversation.

When things really get going, the movie begins to throw in too many nods to other films. The way these moments are handled are not homages, they become rip offs. There is a scene where one friend runs away screaming in terror and the other two leads run through the halls frantically screaming his name. When they find him, he is standing in a corner facing a wall of a dirty room with weird symbols on the walls and will not answer them. Sound familiar? Let us all say it together now, “Blair Witch!” There are many instances of “borrowing” from better films that made my head spin and, after two too many of them, began to make me angry at the director.

One major issue lies within the film’s screenplay. Once they are in the asylum and things begin to happen, each of them witnesses a sighting of a ghost woman with long hair. One of the characters suggests that it must be Crazy Kate, the woman from his father’s ghost story at the beginning of the film. This makes no sense as the story Oliver Stone told was about a woman in the woods during a camping trip. When the others concur that it must be her it is ultimately frustrating.

Another screenplay problem is the fact that it begins to go all over the map. First it is ghosts of the inmates of the hospital. Next we hear that it could be Crazy Kate. Then, completely out of nowhere, we are led to believe that there are demonic forces at work. At the beginning of the film Alexander Wraith jokes about devil worshipers using the place but he is not being serious. Toward the end of the film, there is the sudden appearance of ghosts wearing goat heads and chanting strangely. Where did this come from? Pick one evil and stick to it.

The film is made up of snaking through corridors and rooms while the camera moves to show us the extremely grotesque asylum, which is one of the film’s best features. The look of the hospital is the stuff of nightmares. Sean Stone reportedly spent a budget of almost 2 million on the film and it shows in the excellent set design. Production Designer Phillip Salick should be commended.

The actors are fine and Sean Stone deserves some credit here for getting a solid cast to give good performances in this kind of film; Stone especially stands out as he shows us that he does have acting talent. This is, I would wager, from being around his father’s films all of his young life and watching the tonnage of great actors that have played before him.

“Found footage” films do not usually benefit from superior sound design. This film does and it manages to make certain scenes very eerie and atmospheric.  Sounds of growls and ghostly noises are used very effectively in showing us the lead character’s psychological deterioration and descent into madness. Much credit goes to the eight person sound department.

The film has many frightening moments and is quite effective at times. Truthfully, there were two or three times where the film became absolutely terrifying.

The bad news is that it is all surrounded in a cloak of “been there, done that” filmmaking. We have had our fill of the “found footage” genre and it is no longer effective. The same happened with Japanese horror films. American filmmakers began to copy the look and style of the Japanese horror cinema to the point that the potency of their films became lost, as is now the case with this current horror sub-genre.

The film does work on an esthetic level and, at times, is much creepier than many recent horror films. Sean Stone shows that he has a feel for the horror genre and we can see the spark of an interesting filmmaker to come. However, this film is too scattershot and bloated while still feeling undercooked. It tries too hard at some scenes and gives up originality in others. I was, at once, frustrated and intrigued. The bottom line is that once I would enjoy one moment there were three more that would ruin the fun.

Greystone Park is an interesting failure yet one I would halfheartedly recommend. There are terrifying moments to be experienced but when I look at the film as a whole, I must say that it was, almost, a nice try.