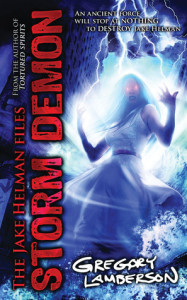 Storm Demon, the fifth book in Gregory Lamberson’s occult detective series The Jake Helman Files from Medallion Press, is now available as an e-book.  The official publication date of the trade paperback is October 31st, but the TPB is available now to Amazon customers.  The novel is the penultimate installment of Lamberson’s six book opus, which will conclude with the publication of the final volume in 2015.

In Storm Demon, Helman returns from a victory battling “zonbies” on Pavot Island only to discover that a close ally, psychic Laurel Doniger, has been abducted by Lilith, a centuries old supernatural being who will stop at nothing to get her way, including destroying New York City.  Lamberson sees the novel as a tribute to the work of stop motion animator Ray Harryhausen and the disaster films of Irwin Allen, and promises the level of action, sex and violence which his readers have come to expect.  In addition, Storm Demon will solve several mysteries established throughout the series.

“This is the next to last book in the series,” says the author, “so it’s time for all of the characters to lay their cards on the table, and it’s time for me to shuffle the deck.  Like every book in the series, Storm Demon is a self contained story that also serves a larger story, and it’s time to set the stage for the grand finale.  Jake and his lady love Maria Vasquez battle witches, an animated statue, rampant tornadoes and water spouts, and several threats I choose not to spoil.  As always, Jake takes a beating and kicks on ticking, and all of the supporting players get their moment to shine.”

Lamberson’s next novel, The Julian Year, will be released on December 31st.  The Julian Year is the first TREEbook (Timed Reading Experience E-book), a revolutionary e-book format which utilizes time triggers and branching technology to tell multiple variations of a story.  The plot posits a crisis in which every person on earth is possessed on his birthday, leading to a one year countdown to the extinction of mankind.  October 2014 will see the publication of The Frenzy Wolves, the final book in Lamberson’s werewolf trilogy the Frenzy Cycle.