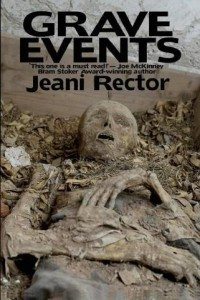 This is to all the ravishing, dark-haired ladies out there. If you really want a man to do your bidding, then drug his tea and cast a spell over his mind so he only thinks of you and no one else. Otherwise, he may soon stop thinking with his little head and start with his big one, noticing all the coincidences that have been taking place in his not-so ordinary life.

Such is the case with Rick Evans, a college student who’s drawn to his attractive fellow student, Carley, in the short novel, Open Grave. One thing leads to another and then Rick is soon attending a séance led by the beautiful, mysterious Raven. Though Rick doesn’t at first believe in the occult, he swiftly finds himself under Raven’s dark spell, forgetting about Carley like an old memory and focusing the attention of every cell in his body on pleasing Raven, desiring to be with her every minute of every day. Of course, Rick is a nice looking guy, but why would a ravishing beauty like Raven want him in the first place when she could have any man of her choosing? This is the question that keeps plaguing the young college student when Raven isn’t around and he’s able to think at all.

It isn’t long before Raven has Rick helping her in digging up parts of a body from a grave in a Sacramento cemetery. The skull they retrieve is used in another ritual, introducing the spirit of Rick’s late grandmother, who he never knew. It seems that granny was a witch of the worse kind, having lived for decades without aging a single year in appearance. Everyone is now after granny’s secret formula and her old book of spells, hoping to find a way of retarding the aging process.

Everything isn’t as it seems, however, and Rick begins to realize that there may be no one he can trust except for Carley and his parents. But even then, the truth is difficult to discover as he attempts to combat the evil that has been released due to his own innate folly and uncontrollable lust…an evil that knows no bounds and needs a sacrifice to appease it.

Jeani Rector, editor of the online magazine, The Horror Zine, and author of Pestilence: A Medieval Tale of Plague, knows about horror and how to write it. Rather than getting right to the action as she does in her short stories, she takes the slow approach so that readers can get to know Rick Evans, Carley, and the mind-numbing Raven, along with her so-called strange friends. Though you never quite find it within yourself to forgive Rick for his object stupidity; you can understand why he does the things he does. The point here is that Rick isn’t really at the center of this story, but rather it’s his grandmother and her book of spells. Rick is only a vehicle for those to use in getting to what they want.

Ms. Rector creates her vision of horror with precise words that lull the readers into a mindset that prepares them for the unimaginable. The author clearly knows how to develop a world that’s filled with lust, murder and unspeakable evil. The only question I have is about Raven and her disappearance. Will we see her in another story?

Also included in this book is the short novella, Grave in the Woods.