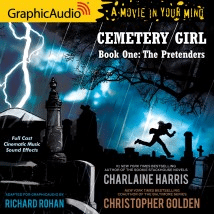 GraphicAudio® A Movie in Your Mind® Celebrates their 10th Anniversary this month with their exciting new CEMETERY GIRL audio. Adapted from CEMETERY GIRL: THE PRETENDERS, a Graphic Novel written by New York Times bestselling Fantasy authors Charlaine Harris and Christopher Golden and illustrated by Don Kramer, the audio version is directed by Richard Rohan.

The GraphicAudio® production of CEMETERY GIRL Part 1: THE PRETENDERS is the first time that the “A Movie in Your Mind®” sound design takes center stage driving a suspenseful and eerie listening experience, where sound becomes a character in its own right. The Sound Design was created by Nathanial Perry and he and Director/Adaptor Richard Rohan carefully constructed the scenes in audio. CEMETERY GIRL Part 1: THE PRETENDER will be available in 5.1 Surround Sound and Stereo Audio Download Formats exclusively at http://www.graphicaudio.net.

Charlaine Harris says, “Wow, what a pleasant surprise! GraphicAudio® has knocked this audiobook out of the graveyard. I can’t wait to hear the next installment.”

CEMETERY GIRL centers around a teenage girl who awakens, bruised and bloody, in the grim surroundings of an old graveyard, with no memory of who she is, how she got there, or who left her for dead. All she knows is that whoever tried to kill her is still out there. Not knowing where to go, or who to trust, she avoids all human contact. She survives on stolen food and uses a cemetery crypt as her home. She takes the name Calexa from the name above her crypt.

Calexa soon makes a startling discovery: she can see the spirits of the dead, and one in particular, can see her. The victim of a murder that Calexa has inadvertently witnessed compels her to take action, even if it means her own life will be put at risk. Now Calexa must make a decision: continue to hide to protect herself—or come forward to bring justice to the sad spirit who has reached out to her for help…

Rohan says, “CEMETERY GIRL is the perfect story to explore the immersive atmospherics of audio, especially in the 5.1 Surround format, and GraphicAudio® delivers the listener an experience that is captivating and haunting. Emlyn McFarland has given us a sincere, nuanced and often heartbreaking portrayal of Calexa, the Cemetery Girl.”

Included with the GraphicAudio® download program of the CEMETERY GIRL 1: THE PRETENDERS is an exclusive interview with Rohan and writers Charlaine Harris and Christopher Golden discussing the creation of the CEMETERY GIRL Graphic Novel, cemeteries, Sookie Stackhouse, comics and more.

Over the past 10 years, GraphicAudio® has published over 900 titles and 60 series with Action Adventure genres ranging from Comics, Westerns, Sci Fi, and Fantasy. Listeners can download and experience THE PRETENDERS using the GraphicAudio® Access App for Mobile Devices.

About the Authors:
Charlaine Harris, is the #1 New York Times bestselling author of the Sookie Stackhouse novels, the basis of the HBO series True Blood. She has been published in 35 languages, with over 35 million copies of her work sold worldwide, and her Aurora Teagarden mysteries will be coming to Hallmark TV in 2015.

Christopher Golden is a New York Times bestselling author of numerous horror, fantasy and suspense novels for both adults and young readers. His credits also include writing for comic books, video games and co-writing the online animated series “Ghosts of Albion.”