Gothic Revival Blog Tour – Carson Buckingham on What Does Horror Mean To Me? 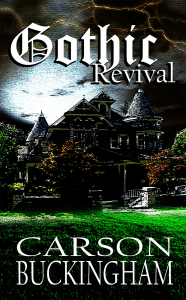 I have always thought there are three phases of fear, both in reality and in horror writing.

First, you have dread.  Something is wrong, but you don’t know what it is and we, as humans, don’t cope very well with ambiguity or vagueness.  The brain likes things to be clearer than that.  Is someone peeking out of your partly open closet door or is it just a reflection from a metal button?  Were those footsteps in the hall, or is the house settling?  What’s scratching at the window? A tree branch? And what’s that strange noise the fridge keeps making? These sorts of things create that “funny feeling,” that unease that we can’t ignore.  Unless we get up and find out what’s really going on, the creepy feeling will only get worse, the imagination takes over, and pretty soon, we have a serial killer hiding in the closet, a zombie shuffling down the hall, and Danny Glick at the window.  Dread demands prompt investigation to short circuit the willies… or to be just the beginning of them, depending upon the result of the search.

Next comes terror.  You’ve unlatched your bedroom door, and find that there’s not a zombie standing there, after all—it’s a werewolf!  You open up the fridge and Cthulhu jumps out at you like a jack-in-the-box from hell!  And let’s not even discuss what is actually in that closet—all slimy and drooling and smelling like swamp water!  The point of terror is that it is happening in the moment.  The vagueness and ambiguity are gone and now the fear has kicked up a notch.  You’re terrified, and now you know precisely why.

And finally, there’s horror.  I think of horror as a sort of aftermath emotion.  You haven’t time to experience it while terrified because you are dealing, or not, with what it is that is terrifying you.  However, if you grab that silver carving knife and give the werewolf a shot in the heart with it, then shortly thereafter discover that what was terrifying you was, in reality, your mother (who never told you about her affliction and whom you love dearly), ah, this is where horror comes in. After you have passed from dread to terror, horror is wreckage left for you to deal with emotionally and psychologically, and sometimes physically, as well.

Dread, terror, and horror—the triumvirate of a successful story that will make you think twice about staying home alone at night.

And one other thing.  Please check your candle supply—the lights are flickering, and I’d hate to think of you all alone… in the night… in the dark…

Alex and Leo Renfield are a husband and wife contractor team who’ve recently moved to the village of Woodhaven, Connecticut to escape the chaos of life in New York. Pretty close to broke, they meet Theodora Hamilton, a somewhat unsavory and odd individual, who offers them an astronomical amount of money to repaint the first floor of her family home.

But along with the huge paycheck comes a set of unsettling rules that must be followed explicitly if they are to accept the offer; one of which is they must reside on the property having no direct contact with the outside world until the job is complete.

Is Theodora Hamilton just an eccentric woman with a peculiar way of doing things, or is there a more sinister agenda that Alex and Leo are unaware of? What exactly does she have in store for this down-on-their-luck couple who have no choice but to accept the offer and the strange requirements that come along with it?

Gothic Revival can be found online at major retailers including: 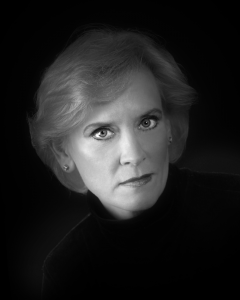 Carson Buckingham knew from childhood that she wanted to be a writer, and began, at age six, by writing books of her own, hand-drawing covers, and selling them to any family member who would pay (usually a gum ball) for what she referred to as “classic literature.” When she ran out of relatives, she came to the conclusion that there was no real money to be made in self-publishing, so she studied writing and read voraciously for the next eighteen years, while simultaneously collecting enough rejection slips to re-paper her living room… twice.

When her landlord chucked her out for, in his words, “making the apartment into one hell of a downer,” she redoubled her efforts and collected four times the rejection slips in half the time, single-handedly causing the first paper shortage in U.S. history.

But she persevered, improved greatly over the years, and here we are.

Carson Buckingham has been a professional proofreader, editor, newspaper reporter, copywriter, technical writer, comedy writer, humorist, and fiction author. Besides writing, she loves to read and work in her vegetable garden. She lives in the United States in the state of Arizona.

You could win 1 of 5 digital copies of Gothic Revival by Carson Buckingham!