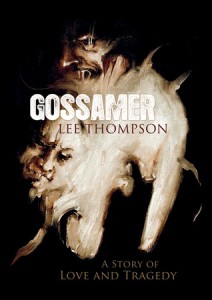 Few writers make it difficult to write objective reviews of their work that aren’t a collection of endless praise. Even fewer can make readers want to hunt for everything else by that author and to devour it. Lee Thompson is both. Having read and admired his works for a long time, it’s tempting to ramble about his prose, or his majestic characterization weaved with page-turning plots. He has the ability to fill his work with subtlety and seamlessly interlaces it with the ‘in your face’ horror elements.

“Gossamer” begins with an introductory section that lets us know a vampire, Julian, seduced a witch who ruled over a town. Fear not, horror fans, because he has infested the town with an army of vampires that have bled the place dry, and we spend much of the second part of the book seeing her plan to re-establish the town.

The witch in question is our decidedly unreliable narrator, Dorothy Good, who witnessed the death of her innocent mother, Sarah Good, in Salem, 1692. It’s not easy to make an evil child sympathetic, not to mention not turning them into caricatures, but Thompson pulls it off well.

Dorothy’s aunt, a witch, comes into the picture soon after, and says she has come to liberate Dorothy from her traitorous father. Many interesting revelations come about in this section, and the skeletons come out of the closet. In this case, that’s almost literal with Auntie digging up a certain charred corpse. Although Dorothy ends up in jail, Auntie springs her out and they live in solitude for a good while until more families come to build homes and establish a town, Gossamer. Dorothy’s aunt falls for one of the neighbors, Jeremiah, but he’s hiding a few secrets, including a roll in the hay with Dorothy. As the novel goes on, Dorothy’s moral compass becomes even more troubling.

She continues the work her aunt did on a carousel that gives people eternal youth. But as with all things that seem too good to be true, the carousel comes with a cruel price. We also meet an odd young boy, Peter, who Dorothy thinks is one of her aunt’s unfinished creations. Soon after, the vampire Julian comes along, but instead of offering love, he brings conquest to the town and overruns it with vampires, attacking the townspeople she thinks of as her children.

The second part of the novel revolves around Dorothy’s attempts to take back the town and re-establish it, and starts off in 1999. We meet a woman named Brooke, her fiancé, Angel, and her teenage daughter from her first marriage, Natalie. They wind up in the town of Gossamer while en route somewhere else and make the single most catastrophic decision of their lives when they stop.

Angel misses being a bachelor and doing things on his own terms, and bemoans the fact that he won’t be able to do his favorite activities, like playing video games, once he’s married, but he sucks it up for Brooke and Natalie more or less. Brooke is a police officer but more delicate in some ways than one would expect. Her ex-husband is in jail and she’s still struggling with getting him out of her head. Natalie seems like a typical angst-ridden teen but harbors a lot of bravery and a fighting spirit when push comes to shove.

Dorothy finds them and appears as an old lady, claiming she has lost her husband and grandson and wondering if they can help her. It doesn’t take long before the mind games begin and the characters descend into an abyss from which the reader will wonder if they will ever escape, as Dorothy weaves an incredibly tangled web.

The vampires are good old-fashioned killers who most definitely do not sparkle, and Peter comes with a spidery enhancement that adds a unique twist. A satisfactory resolution follows the big payoff at the end, although it’s tinged with bits of tragedy, and ultimately makes this a must-read for any fan of dark, literary horror.

“…she knew how easily those you opened yourself to could slide the unseen blade of betrayal between meat and bone.”

Lines like the one above are what set Lee Thompson in a category of his own. The diction and language have an almost fairy tale kind of quality, but despite the more formal tone and style, the action is constant and moves the story along quickly.

Thompson infuses each of his works with a unique voice that belongs to each individual character and one will never be mistaken for the other. “Gossamer” is a mythical, almost philosophical book that strips the reader naked and forces us to challenge our assumptions about love with passages that will touch you in places inside yourself you forgot exist. It’s difficult to describe the beauty of Thompson’s prose, as it has to be experienced in order to be truly felt, but reading “Gossamer” is like drinking a rich wine. It’s opulent and Thompson makes each word count.  If you haven’t already added Lee Thompson’s works to your bookshelf, what are you waiting for?