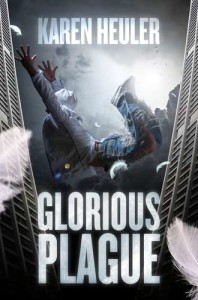 I believe Karen Heuler’s Glorious Plague, at least at the beginning of her strange and thoughtful novel, just may depict the happiest apocalypse in literary history. The victims climb up to the highest point they can find and sing inspirational songs in rhapsodic feelings of bliss. Unfortunately they also die so all is not roses and puppies.

Dale is taking livestock feed samples for her government work when she first starts noticing the strange and deadly behavior mentioned above. She and Omar, an entomologist, may have an idea to why this illness is spreading but her research is interrupted when her daughter Hallie becomes missing. She goes to New York City to search for her and finds there are few survivors, a general loss of direction by all who are left, and a few suspiciously eager to take a leader’s role. Add on to the apocalypse scenario the appearance of angels in the sky, Jesus dragging a cross through the streets, and the elephant god Ganesh running for mayor and you have a very odd situation indeed. The question that crops up is: Are these events part of reality or does the plague virus still have a hold on them?

The author has accomplished a rather quiet take on the apocalypse. That is not to say there are not some very disturbing moments in her book. However, she is directing the narrative from the eyes of the protagonists and many of these odd occurrences look very normal to them.  Heuler does a great job in communicating that perspective. I would call this an example of magical realism in any other novel but the author’s style is best described as speculative or science fiction rather than horror or fantasy. There are a number of different perspectives and interpretions as the author moves from one character to another. But I found it a bit annoying as they seem to switch whenever I started hoping for some resolution to the character’s dilemma. But that is not a criticism as Heuler doesn’t seem to be interested in resolution but rather in an examination of how we perceive reality, especially in the way that reality is shaped by our religious perspectives. The question of what shapes our view of life is never too far away and it is fascinating to read the subtle way Heuler addresses the issue.

But in the long run, I still wanted to see a little more resolution in the plot process. There is a very open ended conclusion typical of the type that signals a sequel that I found unfortunate. While I enjoyed the ride I didn’t find myself caring enough about any one character to wonder what will happen in the future. I wish Heuler espoused her ideas more directly at times. However I usually am enthusiastic over books where the author lets the reader do some of the work, so you could say I am a bit conflicted over it. The bottom line is, despite minor issues, I found Glorious Plague to be a thoughtful, unique, and ultimately enthralling novel I can recommend to the fans of apocalypse fiction.