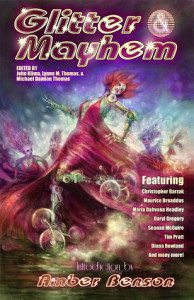 “Glitter and Mayhem is a speculative fiction anthology of Roller Derby, nightclubs, glam aliens, (literal) party monsters, drugs, sex, glitter, debauchery, and more.” Yes. Yes, it is. The call for stories was wide open, and there are a number of dark fantasy and horror stories packed into this particular night club. Like any great party, there’s an interesting mix. Within are tales of ghosts on the party circuit, interstellar roller derby leagues, and nightclubs filled with demons and Fae. These are the dreamlands, populated with the weird and the fabulous. It is an adventurous and rebellious collection pervaded with a sense that boundaries and limitations are arbitrary. Space, time, gender, consciousness: none of it is real, everything is just a matter of perspective. And if you don’t like the perspective you have, there’s a pharmaceutical solution for that. The call pulled for retro visions, but inspiration could just as easily been drawn from Katy Perry’s Last Friday Night, Lady Gaga’s Just Dance, and Pink’s Raise Your Glass. Scenes come and go, but the hunger for them remains and the beat goes on.

The challenge of this anthology is that it mixes genres so freely. Although there are thematic elements in common, the type and tone of stories varies more wildly than a lot of anthologies with clearer genre boundaries. The shifts can be a little disorienting, but then that may be part of the point, right? This effect is amplified by a couple of stories that are more tenuously connected to the central theme, but, on the whole, the glitter wins out. The individual pieces are uneven, but some are wonderful and most at least good. The editors have made good on the thematic promise and produced an entertaining and unusual collection. There were a few typos and formatting issues in the advanced review MOBI file (e.g., widows and orphans), but these may have been corrected by release.

In various ways, these stories are often about escape. Characters are trapped by supernatural curses, prejudice and societal expectations, unsatisfying relationships, shitty jobs, and the awful mundane grayness of it all. They long for a little magic in a cold and ordinary world.  For acceptance. For freedom. To get past the velvet ropes to the VIP lounge, or down the rabbit hole. Something permanent would be great, but even a little taste will do if that’s the best we can hope for. We can find or lose ourselves in identity games and sensual abandon.

With the retro flavor comes a sense of nostalgia for innocent party days without consequence, when people believed cocaine was not addictive and HIV was, at most, a rumor. The anthology reminds me of Paul Thomas Anderson’s Boogie Nights, and not just because of the roller skates. Midway through it starts to turn, moving from pure good times to the seamier side that exists in every Scene. Eventually you find out that the VIP Lounge at Studio 54 was a filthy basement storage with lawn furniture and bare mattresses on a concrete floor, and Edie Sedgwick doesn’t wake up in the morning. Structurally, the editors then choose to pull away from the uglier reality and return to happier fantasies, but even then there are stories about people trying to hold onto things after they are gone, or to the idea of things that never were. The final piece may be a recognition of the illusion and desperation of it all in the end.

Does it cohere? Not entirely. But this is about chaos, so that’s o.k. If one story is not your kind of party, turn the acid-soaked page. Take the red pill, board the Mothership, and skate beneath the mirror balls. Just for tonight, the Thin White Duke is on the stage, and tomorrow can’t come unless we let it.