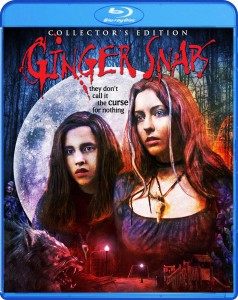 Werewolves are one of the big three of classic movie monsters, and yet they seem to get so little respect. Oh don’t get me wrong, there are a lot of werewolf movies out there, but sadly, there are so few good ones. So when a specular shapechanger flick does rear its shaggy head, about once every blue moon or so, it is something to howl about. And so it was when this humble little film came down form the Great White North (Canada) back in 2000. It was an instant hit with nearly all horror fans, or at least those with taste, and for good reason. Not only was it well made with great acting by a pair of young ladies who had to carry nearly the entire movie on their shoulders, but it did what so few horror movies ever bother to do: something new with a very old idea. In this case, it was telling the typical werewolf story through the eyes of a pair of outcast teenage sisters, and relating the curse of lycanthropy to the monthly curse all women must suffer through. Yes, it was a very feminine, perhaps even feminist, take on what is usually a very hyper masculine story of the untamed beast that hides within the hearts of all men…er, women. Well this movie pulled off that neat trick with style and grace, so much so that it was followed by a very good sequel and a somewhat lesser prequel. And now, Ginger Snaps is out in a new Blu-ray/DVD combo pack from Scream Factory. That right there should be all you need to know for you to make up your mind and get this. It’s a great movie, on Blu-ray and looking better than ever, put out by a company that knows how to treat horror fans right. But hey, I’m here, you’re here, so let me give you your full nickel’s worth on this review, not that you should need it.

In Ginger Snaps, a pair of morbid, creepy sisters get attacked by a werewolf one night with big sis, Ginger, getting mauled in the process. Soon she is going through changes that her mother, played to cornball perfection by Mimi Rogers, is only too thrilled to assume is “her little girl becoming a woman.” Ginger and her little sister, Brigitte, know better, even if they don’t want to admit it, since Ging has now got claws, fangs, and even the cutest little tail you ever did see. Oh, and then there’s also Ginger’s ramped up sex appeal (animal magnetism, or just the fact that actress Katharine Isabelle is really hot?), with a new found appetite to match. Speaking of appetites, sexy fun time is not the only thing this young woman soon starts craving.

What really makes Ginger Snaps stand out from the pack are the performances of Katharine Isabelle and Emily Perkins, who play Ginger and Brigitte. These two actresses are amazing and they nail their roles as confused social outcasts, young girls discovering what it means to be a woman for the first time, people dealing with something otherworldly and horrible, and most importantly, sisters who love each other. In all of those roles, these two are completely believable, and if they weren’t so damn good here, this movie would have fallen flat. It is a testament to this film’s writing, direction, and acting, that I can so easily overlook the somewhat lackluster werewolf effects. No, they’re not horrible, but I have crucified other werewolf flicks for having such puppety-looking lycanthropes in them. Here, I hardly notice them because I am too enthralled and entertained by everything else on the screen. If that’s not high praise for a movie, then nothing is.

As for the new Blu-ray/DVD combo pack from Scream Factory, it comes with a bunch of great extras to howl about. There are two audio commentaries, one with the director, John Fawcett, and the other with writer, Karen Walton. There is an hour long featurette about the movie called “Ginger Snaps: Blood, Teeth and Fur” that has interviews with a bunch of the filmmakers and actors from the movie. There is another called “Growing Pains: Puberty in Horror Films” that’s about half an hour long that has four ladies of horror discussing how ‘that time of the month’ has been portrayed in fright flicks. There is a short, five minute, press release featurette, a collection of cast auditions and rehearsals, and some deleted scenes that can be watched straight, or with commentary by Fawcett or Walton. There is a short, behind the scenes bit about the creation of the werewolf, some home video taken on the set by director, Fawcett, theatrical trailers, TV spots, and a collection of production design artwork. All in all this is a big, beastly of extras that fans of this quirky, Canadian monster movie will really get a kick out of.

Ginger Snaps is one of the best werewolf movies ever made. No, it’s more than that, it’s a great horror movie regardless of subgenre. No, check that, it’s a great movie, period. It does something new while still having loads of respect for what came before, and that’s a very rare thing. It is well written, acted, and directed. If you have yet to see this flick, do so at once, and do yourself a favor and watch it on this great looking new Blu-ray that comes loaded with extras. If you’ve already seen it, then you know how good it is, so you’re probably already going to get this new release. I can easily and highly recommend the tasty treat that is Ginger Snaps.