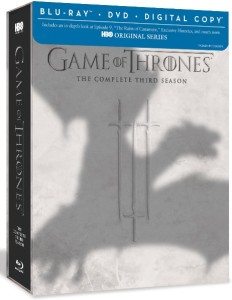 Yes, this isn’t a horror show, despite and the blood, gore, murder, and undead guys in it. Yes, it is one of the biggest shows on television right now, and rightfully so. It is damn good, probably my favorite TV show running, and that’s saying something, considering that we are currently in a golden age of great television. So that means that you probable already know about this show, and if you have any interested in it at all, you’re already watching it. But just in case you are a newcomer to this amazing fantasy series, here is the nickel tour of the show.

Game of Thrones is based on the A Song of Ice and Fire series of books by George R. R. Martin and it is one of the best adaptations from book to screen I have ever seen. The show does occasionally break away from the cannon of the books, but when it does, it does it so well that none of the fans seem to mind. With the crybabies that most fan culture has devolved into, that’s amazing.

As the title suggests, Game of Thrones is more of a political drama than an action packed sword and sorcery epic like Conan or the Lord of the Rings films. That doesn’t mean that sword never meets flesh in this show, but the best parts actually come from watching how the characters interact with each other. Oh and the scheming. And the plotting. And yes, the sex. Be warned you prudish fans of fantasy, this show is dripping with lots of steamy sex. Mmmmm…

Oh, sorry, where were we?

This season begins north of the imposing wall of ice, in the land where dead men walk. The often quoted saying of, “winter is coming” has never felt closer or more ominous than is has now. Now that would usually be enough for any television show, but Game of Thrones also has four lords, all calling themselves king, fighting a long and bloody war for the Iron Throne and the right to rule all of Westeros. As if that wasn’t enough, there is the Mother of Dragons to the east who is amassing her army, conquering cities, and continuing to raise her three dragons. But not all things are doom and gloom, death and destruction. There are a number of weddings this season, and everyone loves a wedding, right? Oh and the Lord of Light continues to gain in influence, and anyone with that title has got to be a good guy, right? Just like The Lightbringer. Yep, nothing wrong there.

Season Three is another great season for this amazing show. If you haven’t read the book, and can avoid the internet like the plague for fear of spoilers, there are some amazing surprises waiting in here for you. Combine that with the usual topnotch acting, awesome looking scenery and sets, beautiful people getting naked (a lot), and enough blood to sate any gorehound’s ravenous appetite for the red stuff, and you’ve got a must watch show if there ever was one. But as good as this show is, how is this new Blu-ray boxed set?

Thankfully, very damn good indeed. Unlike other cable networks that release their flagship shows on barebones discs (yes, I’m talking about you, Showtime) HBO always delivers the goods, and this new Blu-ray/DVD/digital set for the third season of Game of Thrones is no exception. First, every episode has an “in-episode guide” that’s a collection of pop-ups that can be used as the show plays, each one giving information on the people, places, and backstory of what you’re watching as you watch it. There are also a number of audio commentary tracks included here. Now, not every episode gets some, and some get more than one, but all told there are twelve. That’s more commentaries than there are episodes. There is a 14 minute recap of Season Two with the cast and crew called “A Gathering Storm”, a featurette on the new characters being introduced this season aptly called “New Characters”, and there is a special about the most important, and infamous, episode this season, that runs concurrently as the episode plays in pop-up fashion. However I won’t tell you what episode that is, just in case you have yet to see this season. If you’ve already seen it, yeah I’m talking about that episode.

And if that wasn’t enough, there are a bunch of interactive goodies on here that collect text, pictures, and animated shorts on all aspects of the world of Game of Thrones, and the animated bits are voiced by actors from the show. If you want a primer for all things Game of Thrones, these extras are what you’re looking for. They include “Roots of Westeros”, “Histories & Lore”, “Inside the Wildlings”, and “The Politics of Marriage”. There is a ton of information on these features and all of it was not only well produced, but entertaining. A collection of five deleted and extended scenes brings this impressive list of extras to a close.

Game of Thrones: Season Three is a must own for any fan of good television. Not just fantasy, but dramatic, funny, action-packed, sexy, and yes, sometimes scary television. This is beyond highly recommended. Make sure you get this when it comes out February 18th.