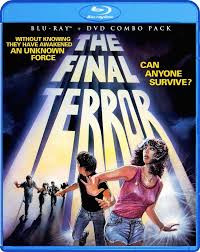 I love Scream Factory for many reasons, chief among them is their love for old fright flicks that have been forgotten by almost everyone. That is the case for The Final Terror, a 1983 backwoods slasher flick that many modern horror fans have never seen, and only a few more have heard about. Now, it’s not a great movie, but it’s not bad, either. It has many enjoyable parts, and even a few surprises, and I’m not just talking about the surprisingly good cast. But I’m getting ahead of myself here. So get your bug spray and your sleeping bag, were going out to the deep, dark woods for some terror of the final kind.

First thing’s first, let’s talk about how this new Blu-ray/DVD combo pack looks. Well it seems that all of the original film elements of this movie, such as the negative and the inter-positive, are lost. Scream Factory went through six different prints of The Final Terror, lent to them by individual collectors, to put together the best transfer that they could. That means this release isn’t up to Scream Factory’s usual high standards. The color and light flickers from time to time, there’s some grain or blemishes on the screen, but as someone that has the only other DVD of this movie even put out, it looks leaps and bounds better here than it has ever looked before.

As for the story, it’s about a group of young forest rangers, and their girlfriends, going out to the Oregon redwood forest form a “work detail.” In reality, it’s the same thing every group of young ones get together to do in slasher flicks: smoke pot, drink, have sex, and party! Oh, and to get killed by an unknown assailant using a number of sharp and wicked tools. So The Final Terror is the basic stalk and slash set in a wooded setting. That said, it is a better than average film, slasher or otherwise. Unlike many in the subgenre, it looks really good. The director, Andrew Davis, knows how to use the camera, and this film is surprisingly well shot.

Speaking of surprises, easily this movie’s biggest one is the number of future well-known actors that are in it. Besides top-billed Adrian Zmed (of T.J. Hooker fame) there are supporting roles by Rachel Ward (Against all Odds and The Thorn Birds), Daryl Hanna (Blade Runner and Splash), Mark Metcalf (Animal House) and Joe Pantoliano (The Matrix, The Sopranos, and about a thousand other movies). That’s a pedigree of talent few movies can claim.

Hey, do you want another reason why I love Scream Factory? Well not only do they release little, lost gems like this on Blu-ray, looking much better than they ever had before, but they bring them out with some nice extras to boot. This release is no exception. Here you will find a director’s commentary with Andrew Davis, a 22 minute retrospective/behind the scenes featurette called “Post Terror: Finishing the Final Terror” and a dual interview with actors Adrian Zmed and Lewis Smith. The usual theatrical trailer and behind the scenes still gallery round the extras out.

So this is another winner from Scream Factory. No, The Final Terror is not one of the slasher classics that everyone talks about, but it’s well made with some good kills, memorable characters, and more than a dollop humor. In short, it’s got everything a good stalk and slash movie should have, and in my opinion, you should have this disc in your collection. Consider it recommended.