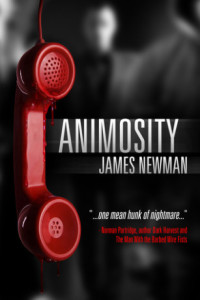 As a writer of the macabre, Andrew Holland spends his time crafting worlds where demons dwell, where shadows slip from beyond the periphery to take up residence among the living, where evil overtakes and inhabits the innocent. His day-to-day life, however, is a light dappled, songbird chorus slice of suburban bliss. On Poinsetta Lane, life is quiet. Holland’s neighbors—while perhaps not quite understanding his writing life—accept and seem to like him. His place in the community is idyllic, and he is blissful with his role as husband to his wife, Karen, and loving father to his daughter, Samantha.

It’s after discovering his wife in bed with another man that Andy’s perfectly structured world begins to crumble. He’s left with joint custody and his trusty dog, Norman, to carry on the façade of the All American Dream.

On a morning walk with Norman, Andy discovers the body of a young girl and the final semblance of normalcy in his life is destroyed. Shaken, he goes to the police who dismiss him as a suspect, but the residents of Poinsetta Lane have other ideas about the strange writer fella who lives among them. What follows is a tale reminiscent of The Twilight Zone’s “The Monsters are Due on Maple Street.” This is a story of mass hysteria and the evil that lurks in humans.

For those who are faint of heart, take caution. Newman’s story is gritty, a gut churning hell ride that slams down full throttle. The murder and rape around which the story is centered is that of a nine-year-old girl; the opening sentences reveal that Holland has murdered three of his neighbors, “four if you count the baby.” The logical reasons for such an action are later revealed, but this makes it no less difficult to stomach.

That’s not to say, however, that there’s nothing to like here. Newman is a gifted writer who knows how to keep the reader turning the pages. With a protagonist who consistently lives in a world haunted by ghosties and ghoulies and long-legged beasties, Newman allows us to feel Holland’s helplessness. It seems as if he should know exactly what to do in a situation such as this, but his befuddlement, his vested love for his community hold him back, and the reader easily identifies with such a reaction.

Begin reading on an empty stomach. You’ll have a hell of a good time, but don’t say I didn’t warn you.