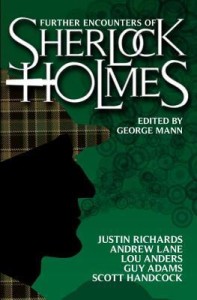 There has long been a cottage industry in writing the further adventures of the ever-popular Sherlock Holmes.  Any fan of Holmes has undoubtedly discovered some truly amazing examples (some rivaling or even better than Doyle’s work) as well as some truly horrendous pastiches that fail to capture the characters, voice, or setting of the Sherlock Holmes canon.  George Mann has written some Holmes pastiches himself, and he’s already edited another collection of such short fiction, so he has the experience to select some enjoyable works for publication.  How did he do in this latest collection of a dozen new short stories containing the further adventures of Sherlock Holmes?

Brief comments on each story, though no major spoilers, follow (I promise not to ruin any of the stories for you):

Philip Purser-Hallard, “The Adventure of the Professor’s Bequest”: A few months after Holmes’ return from the dead, he is asked by Moriarty’s family to retrieve some of the professor’s stolen papers, which Moriarty had sensationally described as being capable of bringing about the collapse of civilization.  As it turns out, that may not have been an exaggeration.  There are wheels within wheels here, with a chilling and moody tone to the affair.  A very strong opening to the collection.

Andrew Lane, “The Curious Case of the Compromised Card-Index”: Babbage engines enter into this story, lending a bit of a steampunk air to the proceedings, as Holmes has decided to transcribe all of his case notes onto machine-readable index cards.  Sounds like a wise idea until someone decides to copy and/or alter the cards.  We see Holmes’ nasty streak come out in this story.  Like Purser-Hallard’s tale, Lane offers a pensive and melancholic resolution.  Very satisfying.  I would seek out fiction from both of the first two authors in the collection.

Mark A. Latham, “Sherlock Holmes and the Popish Relic”: After being warned by a medium of upcoming danger, Watson finds himself in a position where he must decide to either follow Holmes’ rationality (and likely die) or take a non-intuitive chance (and live).  Mundane mystery with hints of the supernatural.  Perfectly fine story, but a bit forgettable.

Nick Campbell, “The Adventure of the Decadent Headmaster”: The narrative frame was clunky: an author has been asked to write a Holmes pastiche for a collection so consults with a mysterious source for details on a hitherto unpublished case to write about.  The story produced involves Holmes and Watson’s visit to a boarding school where a student has disappeared and one of the teachers has died under mysterious circumstances.  They uncover a much larger scheme than anticipated – I don’t want to spoil it – but the whole thing mostly comes off as far-fetched and a bit too over-the-top to not break one’s suspension of disbelief.

James Goss, “The Case of the Devil’s Door”: A revolutionary from a fictional Central American nation comes to Holmes with a story of almost being devoured by what seems like a demonic house during his efforts to clandestinely return home in order to oppose a despotic regime.  A fun little story that relies on a gimmick, but it was entertaining nevertheless.

William Patrick Maynard and Alexandra Martukovich, “The Adventure of the Coin of the Realm”: Holmes and Watson find themselves having to solve a couple of murders onboard a ship crossing the Atlantic traveling from the United States to Britain.  Most of the passengers are coin collectors returning from a rare coin convention, and Holmes must interview them.  The identity of the murderer is so obvious that I suspect most readers would immediately spot it (how can Watson not?!), but the motive for the crime is completely over-the-top and comes out of nowhere.  Maynard has written two authorized Fu Manchu novels, and frankly, this mystery would fit in much better in a Fu Manchu novel than a Holmes story.  I wanted to like this one much more than I actually did.

Roy Gill, “The Strange Case of the Displaced Detective”: I don’t think I’m spoilering much if I describe this as a quick little time travel story.  A fun premise, though it’s wrapped up a bit too quickly without much conflict.

Scott Handcock, “The Girl Who Paid for Silence”: A dark tale with clear supernatural themes that focuses on Watson rather than Holmes.  A little girl has been brutally murdered, and her playmate is seemingly the only witness to the crime.  Satisfying wrap-up.

Guy Adams, “An Adventure in Three Courses”: What a fun story!  Holmes takes Watson out to eat at a restaurant with terrible food, service, and ambience, which sounds like a silly premise for a story, but it sets up a very nice, satisfying mystery that Holmes solves without ever getting up from the table.  Great ending that demonstrates that Holmes can be, as we all know, utterly ruthless.  Definitely one of the most entertaining stories in the collection.

Lou Anders, “The Sleep of Reason”: I suspect that a reader would either love or hate this story, since it seems to diverge so far from the canon, but would probably be most appealing to readers who enjoy planetary romances of the early twentieth century, particularly Burroughs’ John Carter of Mars series.  A story of the famed New York detective S. Quentin Carmichael, his friend Dr. Avery F. Wilson, Mars, psychedelic drugs, and green carnations, among other elements one wouldn’t expect to see in a Sherlock Holmes story.  I still can’t decide if I liked the story or not, but I’m glad I read it.

Justin Richards, “The Snowtorn Terror”: A man is found dead in the snow on the side of a mountain, with his throat cut and no footprints other than the man’s own anywhere to be seen.  Despite this apparent enigma, Holmes prefers to try to solve the case of a missing pile of gold bullion that was stolen from a train that had derailed nearby the previous year.  The explanation seemed a bit far-fetched, but it wasn’t a bad story.

Philip Marsh, “A Betrayal of Doubt”: A very, very old Holmes possibly becoming a bit senile is called out of retirement when Scotland Yard is once again baffled.  Watson’s son, also a doctor, assists, and is not quite sure what to make of his father’s old friend.  Melancholic piece that illustrates the indignities of old age.

The fact that this collection was “unthemed” is both a strength and weakness.  There are few commonalities among the stories in the collection, with Holmes confronting all manner of mysteries.  None of the authors were forced to include, say, steampunk or supernatural elements in their stories, so they truly run the gamut of the types of mysteries that Doyle himself wrote about Holmes.  In general though, this was a very strong collection of Holmes pastiches.  As long as you’re willing to tolerate occasional hints of the supernatural or science fictional elements in a few of the stories, this is a very appealing collection.  Highly recommended.