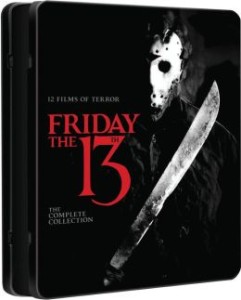 Friday the 13th: The Complete Collection

Cast: a whole lot of people

Look this is a collection of all the movies even remotely related to Friday the 13th, and I’m not going to explain the plot to the Friday the 13th movies. No really, I’m not, because first and foremost, there are 12 movies here, so if I did that, we would be there all day. Also, I know you know about Friday the 13th. Even if you never saw any of them, and I highly doubt that, you know all you need to know about this series. That’s because few movies have left such a mark in worldwide pop culture as these silly little slasher flicks. I mean people in the most remote parts of the world, who have no idea what hockey even is, can recognize Jason’s iconic mask when shown it. So you already know if you’re a fan of these films or not. If you are, welcome brother and sisters of the slasher cult. Can I get an amen and a ch-ch-ch, ha-ha-ha? If you’re not a fan of these flicks, then go ahead and skip this review. It’s not for you.

Still there? Alright. Here is the latest boxed set of the Friday the 13th films. It is notable for a few reasons. It is the first time all the films from both movie companies (Paramount and New Line Cinema) that made Jason movies have been collected all together. This set was put out by yet a third company, Warner Brothers, and it is also the first time all of the movies are out on Blu-ray. So those two things alone are something to cheer about. Or so you would think. Shortly after WB announced this set, the most rabid Friday the 13th fanboys had already started complaining about this, that, and the other thing about it. Well now this big box of Jason goodness is out. Is it worth a get, or were the fanboys right in their rage? Well grab your machete, but leave the drugs, booze, and sex at home, we’re off to Crystal Lake.

While I will pass on the plot of these movies, I will give you the lowdown on all the extras in this big, beautiful, box set. And with 12 films here, we’ve got a lot to get through, so let’s get started with the physical doo-dads and cool bits. Everything comes in a snazzy tin box, inside which the Blu-ray disc folder is held closed with a red elastic band with Crazy Ralph’s immortal warning; “You’re all doomed!” written on it. The disc folder itself is well made and pretty, with little trivia bits between the pages. There is also a very cool, 40 page, full color picture book taken from the bigger and badder book; Crystal Lake Memories. There are two pair of red-blue 3D glasses for Part 3 and a neato “camp crystal lake counselor” patch. Finally there is an ultraviolet code for the whole set included in here so you can get your slasher fix on the go.

As for the individual discs, I think all of the extras here are parts from earlier versions of the various movies. While it doesn’t look like there is a lot, if any, new special features to be found here, at least there are lots of stuff from all the various past editions. And there is also a whole DVD of extras, but we’ll get to that in a bit. There’s a lot to go through here, so let’s get to it.

Friday the 13th, the first movie that started it all, is presented here in its uncut form. I heard some rumors before this box set came out, grumbling that it was going to be the old, R-rated version of the film, but that’s not the case. This is the uncut version, so gorehounds, rejoice. There’s a commentary track by director Sean S. Cunningham with several of the cast and crew. There are six featurettes of various lengths covering various topics. Since I have 12 movies to get through, I’m not going to list them all individually. Last but not least is a theatrical trailer.

Friday the 13th Part 2 once again sort of gets shortchanged with no audio commentary. Come on, Warner Brothers, you couldn’t find anyone to talk about this awesome movie? Seriously, it’s one of my favorite entries in the entire series. Boo for that, but it does have four featurettes and a theatrical trailer.

Friday the 13th Part 3 is, first and foremost, in 3D! However it is the old red-blue kind of 3D so it only kind of works. The 3D glasses do sort of look like Jason’s hockey mask, so yay for that. You can also watch this movie in standard 2D. Sadly, there is also no commentary track on here, even though there was one done for Paramount’s DVD box set some years back. But that’s not a slight unique to this collection, as it was also missing from the individual Blu-ray release of this from a few years back. No matter, it is a shame that it has not been re-added to this set. There are four featurettes and a trailer to be found here as well.

Friday the 13th Part 4 The (ha ha ha ha ha) Final Chapter is my all-time favorite of the series. Thankfully, it is treated a little bit better in the extras department than the last two entries. There are two audio commentaries here. One is with director Joseph Zito, the screenwriter, and the editor, and the other is a “fan commentary” with horror movie makers Adam Green and Joe Lynch. There are also seven featurettes, a collection of deleted scenes, and a trailer. So all in all, this (not) Final Chapter has the goods, as it should.

Friday the 13th Part 5 A New Beginning and Friday the 13th Part 6 Jason Lives are together on one Blu-ray disc for some odd reason. It was probably done so to save money. It is also the first time either of these movies have been released on Blu-ray. Part 5 does have a commentary track with director Danny Steinmann and the cast and crew. So again, why is the one from Part 3 missing? I can only guess there has to be some legal reason behind it, but I digress. There are also four featurettes and a trailer. Part 6 Jason Lives has a commentary track by writer/director Tom McLoughlin by himself and another commentary with him and members of his cast and crew. There are also five featurettes, a collection of deleted scenes and oddly, only a teaser trailer for this one.

Friday the 13th Part 7 The New Blood and Friday the 13th Part 8 Jason Takes (a cruise ship) Manhattan are also both new to Blu-ray and both on the same disc. Part 7 has a commentary track with director John Carl Buechler and actors Lar Park Lincoln and Jason himself, Kane Hodder. There are five featurettes, a collection of deleted scenes highlighting most of the cut gore gags (damn it) and a trailer. Part 8 is one of my least favorite of the series, but it still gets two commentary track here. The first is with the director Rob Hedden and the other is with actors Scott Reeves, Jense Daggett, and Kane Hodder. There are two featurettes, some deleted scenes, a gag reel, and the original trailer.

Jason Goes (on vacation because he’s hardly in this movie) to Hell and Jason X are also tag-teaming on a single disc and new to Blu-ray. Now after my comments on Part 8, I bet you’re wondering what is my all-time least favorite of all the Friday the 13th flicks? Well it is Jason Goes to Hell. Dear lord is it painful to sit through. And befitting a movie of its sucky station, it only has one featurette and a trailer. But as much as I don’t like this movie, the previous DVD edition of this flick had both the R-rated and uncut version of the movie on it, but here they decided to only include the R-rated version. What the hell for? You know slasher fans will always prefer their flicks uncut, so why not give that to them if you already had it? Also the commentary track from that DVD edition is also missing here. Sorry, but that’s just two stupid mistakes on Warner Brothers part. Jason X, a much better film than the one before it (yes haters, it’s true) has a commentary track, two featurettes, and a trailer.

Freddy vs. Jason has been on Blu-ray before and it gets its own disc here. There is a commentary track with director Ronny Yu, and the two main stars: Robert (Freddy) Englund and Ken (Jason) Kirzinger. It has a huge, multipart “Behind the Story” featurette, a bunch of deleted scenes, trailers and TV spots, oh and a music video from the nu-metal band Ill Nino. Uhm, yay for that, I guess… It pretty much looks like everything that was on the old Blu-ray is on this version.

Friday the 13th the 2009 remake also gets its own Blu-ray here. So again, it looks like a direct port from the previous HD disc. There is no audio commentary here, and there never was, but it does have a pop up, picture-in- picture trivia track. A featurette on the rebirth of Jason, a retrospective of the series, a bunch of additional scenes, the ability to jump right to the “the 7 best kills” form the movie, and Warner Bros. BD-Live for those that have their players hooked up to the internet can all be found here.

In addition to all that, there is a DVD full of extras and featurettes. It’s pretty packed and informative, but it was taken directly from the old Paramount box set. A clear giveaway of that is that it only covers the first eight films. You know, the Paramount movies.

So the million dollar question becomes; is this new boxed set worth getting? Well the answer to that depends on a few things. First, if you already have one of the previous boxed sets, you might want to pass on this one. There’s just not enough, or any, new here to warrant a double dip. That is, unless you are a Blu-ray snob and you want to get all of the Friday the 13th films on Blu-ray for the first time. If you are the absolute collector of all things Jason, then you’re going to get this no matter what I say. If you have yet to get all of these flicks on disc, then this is a great one-package-to-rule-them-all set to get everything in one fell swoop. If Warner Brothers had not wanted to put this out on the cheap and did just a couple of new extras and features on this set, it could have truly been great. In its defense, it does pretty much collected all of the goodies from all the previous editions, except for the oddly missing commentary tracks I previously mentioned. So because of all this, I can only give this set a conditional recommendation at best.