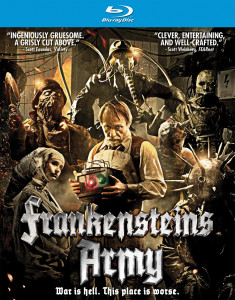 I usually love movies where the horrors of war meet the horrors from the supernatural world, and Frankenstein’s Army just so happens to be one of those films. However, before you strike up the band and plan a victory parade for it, this flick is also a very low budget found footage film, and that’s a combination that, more often than not, spells disaster. Or worse yet, just a boring, insipid, waste of time. Which would Frankenstein’s Army be? Well grab your rifle and helmet, we’re going to war against an army of the undead.

FA starts off with a small unit of Soviet soldiers sometime during the closing months of World War II as they are scouting their surroundings somewhere inside Germany. The reason we, the audience, get to see what happens is because a camera operator is along on the mission so he can make patriotic propaganda films for the Mother Land. Hey, it’s as good a reason as any as to why someone is running around a horror movie, filming everything. However right there is the first stumbling block for anyone that can’t just turn off their brain and go with the movie. If you know anything about history and/or cameras then you’ll know that (A) there’s no way one man could carry enough film through a war zone to make this movie, (B) there would be no sound, and (C) it certainly wouldn’t look this good and most likely would not be in color. Sure they dirty up the frame a bit when it fades to black with CGI grain, the colors are muted and diffused, and they even try to explain the magic camera thing by having someone say “I’ve never seen a camera like that before.” But whatever, if that sort of thing distracts you then this is certainly not the movie for you. If little technical, and sometimes even logic, glitches like that don’t stop you from enjoying a movie, then keep on reading.

The Russians eventually come to a deserted town, deserted by everything except a lot of corpses, that is. After wandering around and finding various disturbing bits, they discover an old and odd factory where the titular doctor literally builds his army. No, it’s not the mad doctor you’re thinking of, it’s his grandson, but he sure is a chip off the ol’ block. Also these are not your daddy’s Frankenstein monsters. These guys come armored, with big metal pincers and blades for hands, some even have long drill bits on their faces, or a head made out of a plane’s propeller. Yeah, easily the best thing about this creature feature are the patched-together, undead war machines. The acting, well it’s serviceable, even if some of the Russian accents can be really bad at times. Oh, and why are Soviets speaking English with horrible accents in one of their own propaganda movies, yet the German characters speak German? Oh there I go thinking again…

The new Blu-ray from Dark Sky Films looks good, but only to a point. Remember, the filmmakers tried to make this movie look not so great in an effort to make it look authentic. As for the extras on the disc, there are a few to talk about here. There is a pretty standard making of featurette, footage of the various stars of the show: the awesome creatures, and a trailer. And that’s it. So yeah, the disc isn’t exactly loaded with goodies, but it’s not barebones either.

Frankenstein’s Army was an enjoyable watch. It’s nothing too serious, it just wants to be a fun monster movie, and it succeeds admirably at that. Yes there are holes aplenty in the plot, and sometimes the micro budget shows here and there, but it is a movie about dead guys with plane propellers for heads, so I can overlook that. Did it hold my interest? Yes. Did it make me smile? Yes. Would I recommend it to others? Yes, and now I have.