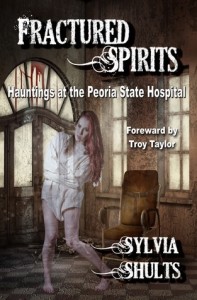 This book was not at all what I expected it to be.  I was under the impression that it was a book of ghost stories about the residents of the Peoria State Hospital over the years.  Instead, it was more a collection of tales about the various ghost hunting expeditions that the author was a part of over the years.

Reading this book I learned a lot about what both amateur and professional ghost hunters use for equipment and how they go about their investigations.  To be sure, Ms Shults does mention several of the ghosts by name, Rhonda Deery and Bookman, and gives their stories as well as those of a few other unnamed spirits.  This non-fiction book is more about how the Asylum has been perceived over the years and today.

She does make special mention and tells the story of the doctor who turned Peoria State into a modern institution.  Doctor George Zeller revolutionized patient care and worker stress during his years as the director of the hospital, making it the premiere facility of its kind.  Its residents included both the super rich and the poor, as no one was turned away because of lack of funds.  This is in contrast to many institutions in the United States at the time, such as Danvers State Mental Hospital in Massachusetts.

At Peoria State, inmates were treated with dignity and respect, no matter if they were insane, epileptic, depressed or simply unwanted by their families and therefore committed.  The story of Dr. Zeller and his compassion makes the book worth its price.  It is the real human story of this book.

Of special interest is reading about the ghosts in the Men’s Ward and in the four cemeteries.  Although they are not named, nor to we know their stories – their interactions with the investigators are sometimes chilling and sometimes down right humorous.

So, not the book I was expecting, yet  overall a really great read.  Ms Shults does become a bit redundant in places, but that doesn’t really detract from the stories she is attempting to tell.  If you love history, if you love spooky, and if you’d love to know how these paranormal investigators (ghost hunters) go about their job – then this is a book you will definitely want to pick up for yourself.