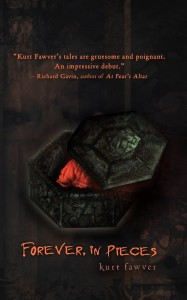 Forever, in Pieces. It’s got a nice ring to it, doesn’t it? It seems at first glance to be a bold choice for a short story collection. After all, forever is arguably the most difficult concept to depict. Probably a wise move to take it piece by piece. The title has more than one meaning, of course, given a little bit of grammatical finessing. Whatever the case, Kurt Fawver proves to be up to the task of writing stories that both live up to the title and scare their readers into submission. What you’ll find here is a different kind of fear than you might expect.

The stories showcased in FiP aren’t particularly gory (though gore has its time to shine), nor are they deeply character-driven (though the characters are relatable enough in an everyman sort of way). In an unusual take on the zombie genre, “The Waves from Afar”, the dead simply stand motionless on the beach, staring at the tides. No explanation is given, and it’s absolutely chilling in its subtlety. Another story turns ritual on its head and sees Santa Claus as judge, jury, and executioner, and it’s not at all flippant. This is the case with most of the stories. Even the most frivolous-seeming subjects are approached with a disturbing angle and a straight-faced respect. To compound this, these stories seethe with a fatalistic bleakness that might just eat away at you if you read them back to back in a lengthy stretch. As Fawver says himself in the introduction, it’s all “… banality and ineffectuality in conflict with chaos and deepest darkness.”

The brand of horror that Fawver brings to the table might be described as cosmic, but it reaches that ineffable peak by scaling things way down to the microcosmic level. The dire situations befalling ordinary people in nondescript places, seemingly by chance, are ubiquitous to the point where it seems that all roads naturally lead to nothing. All that’s out of our control seems rooted in something far deeper than the mortal mind can imagine. There’s no distinct mythos framing this viewpoint, but the further you get into the collection, the more pronounced it becomes. The final story, “Rub-A-Dub-Dub”, best encapsulates this, its central plot device being a hierarchical nesting doll of death upon death, end upon end.

Considering this is the note the collection goes out on, it’s fair to say that these stories are far away from the bright and shiny side of our beloved genre. Instead of rooting for characters who are treading the line between life and death, it’s just as likely you’ll be rooting for the damned line to snap so these poor souls won’t have to struggle any longer. You know things aren’t going to end well anyway. The real draw here is the morbid genius between the lines, and the antiquated prose style that lulls you into the darkest of mires. Forever, in Pieces strips away all the excess of standard horror fare and delivers something that will both give you nightmares and make you feel like you’re living in one. It’s emotionally draining stuff, to be sure, but it’s very much worth reading.