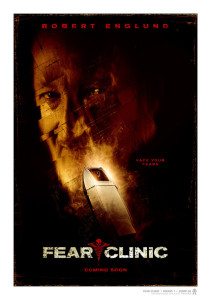 FEAR CLINIC began as a 2009 horror series for FearNet that consisted of five episodes starring up-and-coming talent like Lucas Till (X-Men: First Class) and Kate Nauta (Transporter 2) as well as horror icons Danielle Harris (Halloween 4), Lisa Wilcox (A Nightmare on Elm Street 4) and Kane Hodder (Jason Voorhees). The series and upcoming film stars Robert Englund (Freddy Krueger in the Nightmare on Elm Street franchise) as Dr. Andover, a fear doctor who treats patients afflicted with crippling phobias by inducing hallucinations inside his exposure therapy invention; The Fear Chamber. The series, which focused on a different phobia every episode, received critical acclaim including two 2010 Streamy Awards (Best Sound Design and Best Visual FX for Hall’s company Almost Human) and reached over five million hits on FearNet.com. It has since been added to On Demand and mainstream channels Youtube and Hulu, making it the most-watched horror web series in history.

The project has been in active development for a feature film, written by Robert Hall and Aaron Drane.

Robert Englund is back to reprise his role of Dr. Andover and and has found some fresh new patients to treat.

Fiona Dourif won fans with her role on HBO’s True Blood as Casey, a witch with a dark secret, but it was her recent turn as Nica in Curse of Chucky that cemented her as a bright new star in the horror genre. In FEAR CLINIC, Dourif portrays Sara Falls, a young woman whose phobias begins re-immerging and must seek out the specialized help of Dr. Andover.

Starring as Blake Patton is Thomas Dekker, who skyrocketed to fame with his roles in cult series such as Terminator: The Sarah Connor Chronicles, The Secret Circle and Heroes as well as films such as Kaboom and Laid To Rest. Blake is a disabled man who is brought into the clinic after surviving a terrible tragedy.

Also announced is Cleopatra Coleman (Step Up: Revolution, Silversun) in the role of the boy-crazy and feisty Megan McAllister, Sara’s best friend who takes arachnophobia to a whole new level. These actors join talents Angelina Armani (Chromeskull) and Kevin Gage (Heat, Call of Duty: Ghosts) in rounding out the cast.

“This is a whole different playing field,” says director Robert Hall. “My new film has a much darker and surreal tone than the episodes, and I think fans will really appreciate the direction we’re going in.” Regarding the cast, he adds “I’m terribly excited to get to collaborate with Fiona Dourif who blows me away with her talent, and of course Thomas Dekker gets the best out of me when we’re on set and vice versa.”

The film may be a more mature realization of the concept from the series, but at the heart of the story it focuses on the cerebral nature of fear itself and the manifestations it can take for different people.

The film opens with a tragedy that launches five people into the public eye and enlists Dr. Andover to lend his expertise to help them overcome trauma-induced phobias. A year later, terrifying “aftershocks” rattle the survivors, leading to them finding their way back to the fear clinic seeking answers. As they line up for another turn in the chamber, Dr. Andover believes that something more sinister may be at work.

FEAR CLINIC begins filming next month for a Halloween 2014 release.