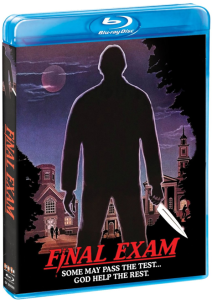 The early 80s was the golden age for slashers all wanting to get a piece of that lucrative pie that films like Friday the 13th and Halloween baked up. In the wake of those box office behemoths, it seemed that a new movie about a madman with a knife was coming out almost every weekend, and one of those was 1981’s Final Exam.  A stalk and slash flick set on a college campus, I hadn’t seen Final Exam in over two decades before I got it in for review. I hadn’t been avoiding it because the movie was all that bad, but because my memory of it was that it was about as typical as a slasher could be. My recollection of it seemed to be backed by others as Final Exam has largely been forgotten by all but the most hardcore of horror fans, and that is rarely the case for the really good, or truly awful, films. So it was with a sense of “oh well” I put this disc into my player. Was it better, worse, or about as meh-rific as I remembered? Well grab your campus I.D. and your favorite butcher knife, we’ve got a Final Exam to take.

The film begins with a couple making out at a Lover’s Lane sort of place, when all of the sudden a dude in a green jacket and blue jeans shows up to kill them in unspectacular fashion. And unspectacular is about the perfect word to describe this flick. Take the ho-hum looking killer that’s about as remarkable and memorable as the Muzak you heard in the last elevator you rode in. Add to that the fact that this killer is never named and no back story is given for him at all, and there is a good reason that not even big time horror fans remember this guy. Combine that with the most basic of plots, uncreative and mostly bloodless kills, and Final Exam, while never technically doing anything wrong, never once does anything new or all that good.

Anyway, after the opening kill, nothing remotely horrifying or slasher-like happens for the next 50 minutes. Yeah, nearly an hour of this hour and a half flick is more of a college sex comedy than a horror movie. Now in its defense, most of the characters used to fill this time are likable or at least funny, so for a bit of a college comedy, it’s not horrible, but it’s just not horrific. The good news is that once the killing starts in this movie, the action is pretty fast paced. The bad news is that it’s not all that thrilling memorable. But didn’t I already say that about this movie? Sorry, but I forgot…

As for the extras on this new Blu-ray from the mighty Scream Factory, there are a few, and for a mostly forgotten also-ran slasher from the early 80s, any extras are a good thing in my book. Here there is an audio commentary track with actors Cecile Bagdadi, Joel Rice, and Sherry Willis-Burch. Then there are interviews with the same three cast members that combined runs about 15 minutes. A classic red banned theatrical trailer rounds out this short list of special features.

So can I recommend Final Exam? Well if you’re one of the members of this movie’s small cult of fans (yes, they do exist) then yes I can, as Scream Factory did a good job with the HD transfer and the movie looks better than it ever has before. If you’re an obsessive collector of all things slasher, then you will probably want to have this in your collection. If you’re not a fanboy of 80s slasher flicks, then you might want to pass on this one, as it’s not the best example of the genre. So consider it a conditional recommendation at best.