In Full Moon, Inc., Nick Moon, P.I. (Paranormal Investigator), delves into a hidden world of monsters and creatures of the night as he takes on a case to retrieve an ancient artifact with astonishing power. The film will have a unique southern charm and will shoot in and around Mobile, Alabama, in spring 2015.

Fighting Owl Films is no stranger to battling creatures of the night. Their first micro-budget feature The Night Shift, also starring Fulmer and Lilley, was released in 2011. A follow-up short film Night of the Krampus was released for free online last December. That film is still available at no cost on YouTube and DVDs are available at Amazon.com. Fighting Owl Films’ projects have received solid reviews, have appeared in numerous festivals across the country, and have earned a few awards — most recently, Krampus was nominated for a Rondo Hatton Award.

For the latest news, announcements and photos, be sure to Like the Fighting Owl Films Facebook page: www.facebook.com/fightingowlfilms. An official website for Full Moon, Inc., will launch soon at www.fullmoonincmovie.com. 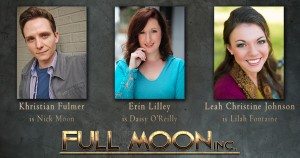