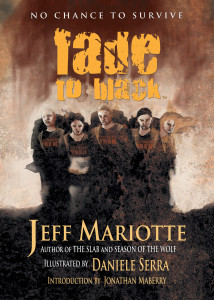 FADE TO BLACK COLLECTED FOR THE VERY FIRST TIME!

BIRMINGHAM, UK, September 20, 2014 – Short, Scary Tales Publications (SST Publications) Owner, Paul Fry is very proud to announce the publication of award-winning author Jeff Mariotte’s acclaimed horror comic miniseries Fade to Black. Originally published as a 5-issue comic miniseries by Image Comics in 2010, this is the first time it has ever been collected and published together, as it was originally intended. The book is a beautiful full-colour hardcover, gorgeously illustrated by award-winning artist and comic book illustrator Daniele Serra. New York Times bestselling author Jonathan Maberry contributed a new introduction, and the book features a new foreword by the author.

About the collected edition, Mariotte said, “Fade to Black was a dark and twisted story I wanted to tell for a long time, and with Daniele Serra, I found the perfect partner. Now we both have the perfect publisher with Paul Fry and SST Publications, who has put it all together as it was always meant to be seen. I couldn’t be more proud.”

The book is available now from all good booksellers and also direct from the publisher’s web site at www.sstpublications.co.uk.

View the cover art, sample pages, and all of the book’s details at www.sstpublications.co.uk/pr/ftb.pdf

About Jeff Mariotte: Jeff Mariotte is the award-winning author of more than fifty novels, including supernatural thrillers Season of the Wolf, Missing White Girl, River Runs Red, and Cold Black Hearts, horror epic The Slab, the Dark Vengeance teen horror quartet, and others. He is also the creator-writer of the long-running horror/Western comic book series Desperadoes and original graphic novel Zombie Cop, among many others. He has worked in virtually every aspect of the book and comic book/graphic novel business, including writing, bookselling, editing, and publishing, both for publishing companies and on a freelance basis. He lives in the American southwest. Find him online at www.jeffmariotte.com or www.facebook.com/JeffreyJMariotte.

About Daniele Serra: Daniele Serra was born and lives in Italy. He works as an illustrator and comic artist. His work has been published in Europe, Australia, United States and Japan. He has worked for DC Comics, Image Comics, Cemetery Dance, Weird Tales magazine, PS Publishing and other publications. He’s a winner of the British Fantasy Award. Find him at www.multigrade.it