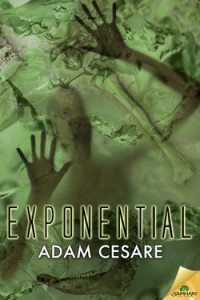 Devotees of classic 1950s and 1960s creature features—and their extended progeny—will enjoy re-living the action, the tension, the sheer gonzo brilliance of a small group of isolated people confronting an unstoppable monster in Adam Cesare’s newest horror tale, Exponential. The cover boasts a blurb from John Skipp hailing Cesare as the “most cinematically savvy new writer kicking horror ass today” (Fangoria), and the praise is both well-deserved and well-demonstrated in this story of threat and survival.

In the beginning, there is only a mouse, named Felix by its would-be rescuer, a janitor in a highly classified laboratory. In keeping with the 1950s conventions, Sam Taylor is relatively unintelligent, vastly unimaginative, and focused only on the possibility of saving one experimental animal from certain death, even though there are sufficient indicators for readers to understand the folly of the act. Taylor learns all too soon for himself that, just as man should not meddle in some things, some things should not be rescued, especially when it means liberating a creature that absorbs, consumes, and grows…exponentially.

The opening chapters follow one of two patterns. Either they introduce the creature’s next victims, reveling in the blood and gore that accompanies Felix wherever it goes; or they bring one of the small cast of key participants a step or two closer to their final destination—a run-down bar in the middle of the Nevada desert, miles from anywhere (but, as it turns out, far too close to Las Vegas for comfort). Finally, however, the main characters are assembled, and they too turn out to follow the conventions of horror films perfectly—two men, two women, each crippled in some central way, each bringing baggage from past experiences that will play major roles in meeting and—each hopes—defeating the monster.

Part of the interest in Exponential lies in the interactions of these four…five, if one counts the requisite barkeep. In the face of the unknown, surrounded by death and darkness, each reacts both as expected and in unexpected ways, penetrating the veneers of convention to bring new twists and turns to the plot. Strengths emerge from weakness, freedoms from inhibitions, successes from failures.

Exponential makes no secret of its reliance on film. In fact, it embraces its cinematic heritage. Chapters are visual scenes, fully developed around a single significant action that moves the story forward. Setting is archetypally filmic, although the fact that Rose’s Tavern is a bar ultimately becomes more important than merely providing an excuse for a gathering place with little or no communication with the outside world. Similarly, the fact that two of the central characters are fleeing from a botched drug heist also becomes less a cliché than an integral element in the plot. Throughout, characters—and the narrator—remind readers to watch for connections with films: a reference to Steve McQueen’s first leading role in The Blob (1958) and several subsequent sideways glances at the film and the actor’s subsequent career. Teen Wolf (1985) has a cameo spot, as does Billy Jack from Born Losers (1967). M. Night Shyamalan’s Signs (2002) becomes a source for one theory about the monster and how to combat it. While not specifically mentioned, Dean R. Koontz’s breakaway novel Phantoms (1983) and the later film version (1998) seem to underscore some of the more specific traits the monster displays, particularly its vulnerability to chemicals that alter its internal structures and eventually—or possibly—destroy it.

Taken in all, Exponential is a quick, fast-paced read that builds on expectations…that invites them and helps define them…and arrives at a satisfactory conclusion—rather like the final frames of The Blob, as the stark white letters forming “The End” transform into a single, elemental “?”