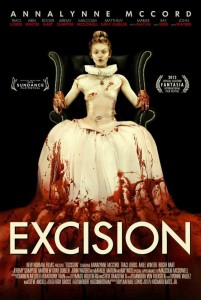 Through the annals of literature and film, dark humor – and black comedies in particular – have been hard to pigeonhole as they often tread a fine line around many genres. In literature, a book like Needful Things could certainly be construed as a black comedy – yet the novel contains a multitude of nightmarish scenes that to call it anything less than a horror novel would be a disservice to the book overall. In the movie media (where the term gallows humor is applied more liberally), the permission slip to laugh at morbidity is accomplished through outings such as the original Evil Dead trilogy. More often than not, however, it is the small independent film where this particular sub-genre burns the brightest.

Although containing elements of comedy and satire, Excision stands out as one of the darkest films I’ve encountered in years … a Donnie Darko for the new decade.

A disturbed and colorless high-school student Pauline (AnnaLynne Mcord) has ambitions for a career in medicine (surgery in particular). Loathed by her idealistic peers, she sits awkwardly at the center of a modern family headed by an eccentric and overbearing mother Phyllis (Tracie Lords), a dying sister with cystic fibrosis, and a father who panders to the whims of his wife. While having features that hint at beauty, Pauline struts around with a simian gait espousing crude insights and able quips that ultimately isolate her from everyone. With a penchant for vivid dreams involving necrophilia, surgical procedures, and vivisection – Pauline is the very definition of misfit. Being a nonconformist aside, Pauline is still at the mercy of all teenage compulsions … including the urge to lose her virginity. And so – after selecting a popular girl’s boyfriend to fulfill the function – she sets about a clinical seduction that eventually leads to a macabre union seldom seen on film.

Though slow at times, Excision is still layered with enough subtext, oddball camera angles, and small cameos to make the experience uniquely atypical. There is Pauline’s math teacher (played tongue-in-cheek by veteran actor Malcolm McDowell); there is her archetypal teenage neighbor across the street who incessantly skips rope. But it’s the relationship with her mother that remains the crux of the narrative. Here, Tracie Lords has given us the performance of her mainstream career, eliciting sympathy and scoundrel in equal measure. Before, I compared this film somewhat to Donnie Darko – although no supernatural elements are involved, a viewer will still see vague parallels in the domestic dinner conversation of Pauline’s family … snippets of dialogue that underscore the notion of pent up anxiety ready to implode under the thin veneer of plastic suburbia. More reminiscent, perhaps, are the themes and tones explored in both American Beauty and the original Carrie.

Excision is the first feature film from writer/director Richard Bates – and here has produced a gem of an outing in all the ways that count: snappy dialogue, original performances, tight direction, and biting social satire. The path to gore is tread subtly at first … but there are enough disturbing visuals overall to place this firmly in a particular horror category that is not easy to define. But be warned: bleakness and nihilism take center stage, so please leave your optimism at the door.