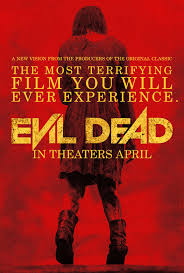 Sam Raimi’s 1981 classic splatter fest, The Evil Dead, is my fifth favorite horror film of all time and is a much beloved genre classic. Working with almost no budget, Raimi gave us a truly funny, sickeningly twisted, scary, and original film.  It is one of only a handful of horror films since the forties and fifties that we can call a masterpiece.

When word spread that there was to be a remake, fans of the original film were in an uproar, me included. As I have stated before, do not remake the great films! Remake a film that was flawed and could have been better. We do not need new versions of Halloween, Carrie, Suspiria, A Nightmare on Elm Street, and The Thing. Be original and write something new and pepper your film with nods to your favorite films.

I was ready to write off this new version until I heard that Sam Raimi and Bruce Campbell endorsed it. They did not just produce the film to add cred to the proceedings, they handpicked the director and, after seeing the finished film, came out publically in support of it. I was a bit more interested after knowing this but I was still leery of remaking such a classic.

I am here to tell you that, while not a classic itself and suffering from quite a few problems, the remake of Evil Dead is a fun, bloody, at times spooky, good time.

The spirit of the 1981 original is there at almost every moment. The buildup takes a bit longer than the original but, thankfully, we follow a few interesting characters until the events get going.

The story is basically the same. Five twentysomethings go deep into the woods, stay at a cabin, discover a Book of the Dead, and unleash violent and demonic forces. A new development works nicely, as their reason for being there is to help Mia, played by Jane Levy, go cold turkey and attempt to kick her life threatening heroin habit. It is a good touch and adds some drama to the proceedings.

She is joined by her brother David, played by Shiloh Fernandez, and three of their friends played by Jessica Lucas, Elizabeth Blackmore, and indie film mainstay Lou Taylor Pucci, whose Eric is the one that opens the book and reads the passage that unleashes the demons in the woods. Lucas plays Olivia and Blackmore plays Natalie. If you put the first letters of all five main character’s names together they spell Demon; a nice in joke for us fans.

The performances are better than a movie like this deserves but that is not why we are here. We are horror fans and we crave blood and scares. Evil Dead gives us some scares and even more blood… lots and lots of blood. There is more blood in this film than any film of the past 25 or 30 years and I am shocked that the film got away with an R rating from the ever skittish ratings board. I liked the gore in this film and how they handled it. There is very little CGI and the director has stated that he wanted to go “old school” in creating the gore. I am glad he chose to do it this way, as it gives the film its proper grotesqueness; one of the standouts being the scene where a possessed character runs her tongue up the sharp end of a box cutter and splits it in two. Then she French kisses another character that writhes in horror. Great stuff! Of course the whole film is a nod to Raimi, but the final 30 minutes are a true love letter to the master director’s love of outrageous gore as they fill the screen with buckets and buckets of blood.

Director Alvarez floods the film with nods to some great horror films while making it his own. The opening credits play over an askew aerial shot of a car driving through the wooded hills. This is an obvious reference to the opening titles of Kubrick’s The Shining. There are a couple of references to The Exorcist by way of the make-up and sound effects when characters become possessed. Of course there are many nods to the original film but they are handled subtly and with restraint. We get our first one at the opening when Mia’s brother walks over to greet her. Mia is sitting on the car from the original film. We are also treated to the sawed off shotgun, the machete, the chainsaw, and more. The references are a large part of the fun.

The look of the film is appropriately grimy. You can almost smell the rotting flesh as we snake through shots littered with hanging cat carcasses and floors covered in blood and god knows what else. I was taken back to the uneasy feelings I had watching Raimi’s original film and the brilliantly disgusting set design for Tobe Hooper’s The Texas Chainsaw Massacre. Those two films created, in a good way, a sickening atmosphere that stayed with you. This film does just that in its design.

There are some problems with the film as there would be with any remake of a beloved classic. One major problem for me is the “fits and starts” approach to the attacks by the demons. In Raimi’s original, once it started it didn’t stop and the audience was taken on a frightening roller coaster ride. By the end of his film we couldn’t catch our breath. In the remake, things begin and our blood pressures rise but then they let up, almost allowing us a breather to ready our senses for the next attack. If the original taught us anything, just let it roll. Once it gets going don’t give us a break. Force us to be terrorized until you tell us it is over. The last 10 minutes do go nonstop but that is how it should have been as soon as the demons were unleashed. It is as Russell Crowe spoke in his most famous line from the film Gladiator, “Unleash Hell!” Yeah, do it!

Another problem I have is the trusty audience pleasing, cheer baiting, and gotcha line made famous and used to annoyance since, by Sigourney Weaver in James Cameron’s Aliens when she told the mother alien to “Get away from her you bitch!” Here there are more than a few and they always seem to end in “bitch” or “mother fucker” to show us how evil or tough someone/thing may be. One of those kinds of lines is bad enough but we are treated to at least five or more of them with most of them spoken by the possessed. That kind of dialogue is passé and silly.

The sequence of the possessed girl trapped under the floor is not near as good as the original film. Her make-up is good but her eyes have too much life in them. In the Raimi version the girl had white lifeless eyes and it made her character all the more frightening. Here the scene, while having its moments, falls a bit flat.

The demonic stuff in the film is fun but not nearly as scary as the original. Raimi gave us brutally frightening demons and the distorted voices were terrifying. Here, the voices are barely distorted so when the possessed females say lines such as “I will eat your soul” and “you will all die tonight” it comes across as silly but not scary.

A large problem for me was the film’s lack of humor. It is relentlessly grim from the first frame to the last. We smile at the clever film references but that is about it. There is no humor and a remake based on a film that was chock full of cleverly placed macabre humor should have plenty.

My final complaint about the film is not the film’s fault at all. It is the inevitable comparison with the original. As I said, Sam Raimi’s film is a masterpiece and one of the finest examples of true horror ever put to film. This film is no masterpiece but stands to be one of the more entertaining horror films in years. I just feel that I do not need to own this film because, frankly, if I get in the mood to watch Evil Dead, I will just put in Raimi’s original.

This is not to say I do not like this new film. I did enjoy Evil Dead; quite a bit actually and more than I thought I would. Despite its problems I had tons of fun with it. Director Alvarez knows how to craft a horror film and I am excited to see where his career takes him.

Despite its flaws, this is a good example of how to handle a remake. This film is fun from the start and gives horror audiences what is all too often lacking in the modern horror film; a blood splattered good time without being condescending to the filmgoer.

Fede Alvarez’s Evil Dead is a profoundly violent and gruesome horror film that, once the backlash dies down, will be regarded as one of the better remakes of recent years.