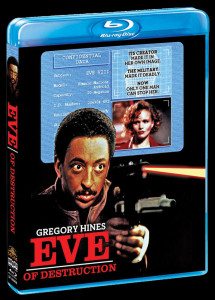 What if they sort of remade The Terminator with half the budget and a quarter of the talent, changed the killer android into a woman, got one of the least intimidating actors to play a tough guy out to stop her, and put the whole thing into a man-hating movie from the early 90s? Well you would have this movie, but would you want it? Now that this sci-fi action flick is on Blu-ray, that is the question. Come with me if you want to find out the answer, but I must warn you, I am very sensitive.

A smart lady doctor named Eve makes an android that looks just like her and then installs into the bot’s robo-brain her own personality and all her memories. Yes, that includes all the baggage that comes along with a crappy childhood and years of abuse. Hey, whatever could go wrong with that stellar plan? Oh I know what could make this better, why not just make the insane murder machine a walking atomic bomb set to blow up the entire city. Oh wait, you did do that, didn’t you doctor Eve? Well that’s just swell.

Naturally the fatal fembot goes berserk one day, escapes its government handlers, and goes out on a killing spree in the big city with the atomic bomb inside her on a countdown. So it all comes down to one man capable of stopping this robot. The meanest, toughest, most badass dude in cinema history: Gregory Hines. Yes, that Gregory Hines. Yes, the dancer.

Anyway, the deadly dancer and the doctor with daddy issues must team up to stop Eve before she blows her top and nukes the city. Unfortunately, everyone robo-Eve meets in her amazing adventure is a stereotypical mwah-hah-hahing man and they all want to beat, take advantage of, rob, or rape the lady robot. Seriously, either android Eve has the uncanny bad luck to bump into nothing but world class jerks, or everyone in the city is just a big evil man™ that deserves to be blown up.

Oh and that “I am very sensitive” crack I made at the start? Well they try to give the robot a catch phrase she says almost every time before she goes off on a shooting spree. Three guesses as to what it is? And man, does it start to get annoying really fast.

The new Blu-ray from Scream Factory looks amazing in HD. The colors are bright and everything pops. That said, there are very little extras on here. OK, just one to be exact; a trailer. Yep, that’s it. Yippie.

So should you pick up Eve of Destruction? Well if you’re a fan of deadly robot movies, then you might get this one. It’s not a bad film, but it is sort of a bland one. It’s an example of low budget, early 90s, sci-fi action, and those were not good times for that genre. So I can’t recommend the movie, nor will I warn you away from it. It’s just not good or bad enough for either. But if this does sound like your thing then give it a shot when it comes out on November 19th.