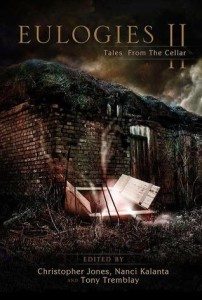 Eulogies II: Tales from the Cellar

About a year ago, horror author Tom Piccirilli was diagnosed with brain cancer. The horror community came together, as it usually does, to help a friend in need. People bought his books, visited him, and supported him and his wife as they struggled through this time.

This anthology is not only a great collection of authors and stories, but the proceeds from purchased copies go to help with Tom’s medical bills. He is much better now, I’m glad to report.

Tom’s story “The Thing With Nothing to Give and Nothing to Lose” starts off the anthology. A man who has had a breakdown and lost everything shows a man who is on the verge of breaking down that it’s the best way to be. Nothing to gain, but also nothing to lose.

Michael Boatman’s “Born Again” is a creepy story of a man who has recently moved to a small town. While sitting at the playground, he is confronted by one of the parents who is worried the man means to harm the children. When he tells the father he has lost a son and is just there to enjoy the children’s playing, he is left alone. He goes home, only to find a nightmare waiting for him.

Jessica is a sad and lonely young woman who attempts suicide in Monica J. O’Rourke’s story “Loneliness Makes the Loudest Noise.” She is treated by Dr. Fields, who injects her with a medicine he recently invented. At first Jessica thinks the treatment has worked, but quickly realizes she has been plunged into a state of mind that will drive her to the brink of insanity.

Brent Jenkins’s “Meepy” is a truly horrifying tale of a little boy who is befriended by Meepy, a goofy stick-figure creature with a balloon head. At first Meepy entertains the little boy, who is grateful since he is bullied at school. But things take a sinister turn once Meepy encourages the boy to hurt those who are hurting him. The boy doesn’t mind hitting his bully in the knee with a brick, but can’t bring himself to push the bully in front of the school bus. Angry, Meepy goes away but comes back with a promise that they can be together forever, but first the boy must kill his mother, who is in their way.

“Mr. Whisper,” by James Moore, is the protector of a family whose children are kidnapped by four escaped convicts who thought hostages would help them get away. They rob a house where two younger children are watched by the oldest, stealing money and guns. They beat the oldest child, taking the other two with them. The son calls for Mr. Whisper, who hears the call. The convicts slowly realize they have made the biggest mistake of their lives.

Over thirty stories comprise this anthology, and all of them are great. The authors – known and unknown – have given their best and it shows. Creepy,   scary, and even heartbreaking stories are found here. Elizabeth Massie’s introduction is fantastic as well.

Eulogies II:  Tales from the Cellar is one of the best anthologies published this year. You will not be disappointed.