Eternal Vigilance: From Deep Within the Earth – Book Review 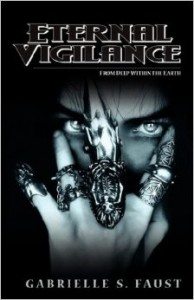 When Tynan wakes up after one hundred years of a self-induced rest, the world is a different place; everything the vampire once knew has been obliterated by a war raging for as long as he’s been asleep. An evil empire called the Tyst has taken hold of society and all its technologies, and its ruthless leader Cardone has plans to take his wicked reign even further by bringing forth a heinous vampire god called the Vicinus, threatening the lives of both human and vampire. When Tynan is reluctantly reunited the remaining few of his kind, he quickly learns that his unique abilities to absorb the life force and knowledge of those he feeds upon is the key to stopping Cardone’s plans and saving what remains of the population. But will Tynan fall into place as a hero or will he leave the world he despises to burn?

Eternal Vigilance: From Deep Within the Earth is book one of the Eternal Vigilance series by author Gabrielle Faust, currently being re-released through Permuted Press. Book one sets up a surreal fantastical world that’s rich in description; Faust paints the apocalyptic landscape of Tynan’s journey with lush gothic detail that’s as stunning as it is harsh. The story itself is well executed and no time is wasted in setting up the main conflict, Faust knows where she wants to take the reader and exactly how to get there.

Tynan is our conflicted anti-hero. Faust offers a glimpse into his past, how the choices he made caused a rift between himself and the few remaining vampires in this new world. Tynan, although strong-willed, is incredibly selfish and juvenile. He trusts no one, he’s immature, he hates the world around him and those who cast him out centuries ago. But there is still a tiny piece of humanity left within Tynan. Whether it’s from his aforementioned abilities or from something else, the humanity he so bitterly clings on to and the rest of his flaws make him a more realistic character. It does take a better part of the book to warm to Tynan and his attitude, but as the story progresses, it’s easy to see more admirable qualities start shining through and to picture the hero that may come into play in the sequels.

From Deep Within the Earth is a smart take on an apocalyptic world where vampires and humans must join forces to stop an evil that threatens to end them all. So if dark, gothic fantasy laced with vampires and the fight against technology is your thing (or if you want to start a trilogy with no wait time for the sequels), give Eternal Vigilance a try. You won’t be disappointed.