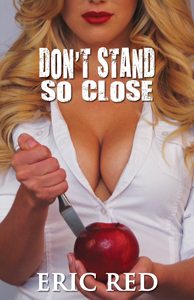 About Don’t Stand So Close: “She was every student’s fantasy and he was the teacher’s pet. She was older, beautiful and experienced. It was the brush of her hand passing back homework. That special glance. He spent hours in class imagining what her body looked like under her dress, until the day came when they had their first kiss. But his wildest dreams soon became his worst nightmare. She took him to forbidden places he wasn’t ready for, but when he wanted to stop she wouldn’t let him. If she couldn’t have him, nobody could, and lives would be lost before it was over. He never should have crossed the line with his teacher, because some lines should never, ever be crossed.”

Praise for the book:

—Joel Schumacher, director of The Lost Boys, Flatliners and Falling Down

—Ramsey Campbell, author of The Grin of the Dark

In Don’t Stand So Close, Eric Red takes what, at first, seems like a typical teen ‘coming-of-age’ sex romp and leads it down a very dark and twisted path. Being ‘Hot For Teacher’ has never been more disturbing.

—Nancy A. Collins, author of Sunglasses After Dark

Don’t Stand So Close is a riveting coming-of-age thriller. Heartbreaking, nail-biting, compelling and deeply insightful. Highly recommended for any teen who stands with one foot in the shadows.

About Eric Red: “Eric Red is a Los Angeles based motion picture screenwriter, director and author. His original scripts include The Hitcher for Tri Star, Near Dark for DeLaurentiis Entertainment Group, Blue Steel for MGM and the western The Last Outlaw for HBO. He directed and wrote the crime film Cohen and Tate for Hemdale, Body Parts for Paramount, Undertow for Showtime, Bad Moon for Warner Bros. and the ghost story 100 Feet for Grand Illusions Entertainment. He is currently writing and directing the film version of New York Times bestselling author Jonathan Maberry’s bestselling zombie novel Dead of Night.

His first novel, a dark coming-of-age tale about teenagers called Don’t Stand So Close, was published in 2012 by SST Publications. His second novel, a werewolf western called The Guns Of Santa Sangre, will be published by Samhain Publishing in November 2013. His third book, a science fiction monster novel called It Waits Below, is coming out through Samhain in summer 2014.

Eric’s recent published horror and suspense short stories include “The Buzzard” in Weird Tales magazine, “Little Nasties” in Shroud magazine, “In the Mix” in Dark Delicacies III: Haunted anthology, “Past Due” in Mulholland Books’ Popcorn Fiction and “Curfew” in Peep Show, Volume 2 anthology. His short stories “Colorblind” and “Do Not Disturb” will be appear, respectively, in upcoming issues of Cemetery Dance magazine and Dark Discoveries magazine.

He created and wrote the sci-fi/horror comic series and graphic novel Containment for IDW Publishing and the horror western comic series Wild Work to be published summer 2013 by Antarctic Press.”