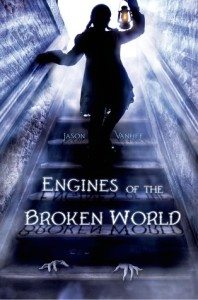 Engines of the Broken World

Wickedly haunting from the first breath.

What an ironic place for a beginning… at the end of everything. For Merciful and her brother Gospel, they thought it was just the two of them at end of their own little world, until the dead rose from the basement to tell them otherwise.

In a world that’s growing increasingly thin and frail, Merciful and Gospel must find a way to remain, even if that means embracing the words of the animal-like minister and listening to the dead ramblings of the creature living inside their dead mothers body.

Caught in the space between child and adult, Merciful and Gospel must make decisions that affect their lives but also that of the world. When their mother dies, their world seems to die with it. Surrounded by snow, and trapped within their home, the cold creeps in all around them. Quickly, Merciful and Gospel find that they are running out of supplies to survive.  Other than the old widow who is walking distance away, they are without a wisp of a soul to run to.

With the body of their dead mother under the table in the cellar, guilt rises up in Merciful’s throat and slowly begins to choke her, while her dead mother’s distant lullaby haunts her.  All the while, the one thing they need to fear is the more sinister than holy minister, who preaches from his animal form.   He watches with his yellow eyes, leaving discontentment and uneasiness, making sure God’s rules are enforced at any extent.

With echoes of the dead haunting them, they soon realize that they are the last ones living in a broken world, one that is so lonely and corrupt that even God himself has turned his back on it.  It is a world so thin that other worlds can breach the veil and speak through their dead.

A dark fantasy horror, this book has an intrigue that sets it apart from all others, hitting on points that form together to create a great horror.   It is a world where the dead stored in the cellar speak from beyond the grave. Each corpse, with its own motive, wants to pull you under their own spell. When the only creature left to speak is a God made creature that preaches the Lord’s will, you soon realize the end is near for Merciful and Gospel, leaving you fearing that it might just be the end of the world.

A story that is wickedly enthralling, it closes the door on what we know of our world, forcing us into an alternate realm.  It is a world of time that has passed them by, one that is vanishing within a fog, taking with it pieces of their own world along with literal pieces of them.

Jason Vanhee is a fresh voice giving a new perspective to Y.A. horror, with his own unyielding writing style which grips you and pulls you into its evil lair.  It haunts you with its lullaby, even after you close the cover.