EMBRACE OF THE VAMPIRE – Blu-ray review 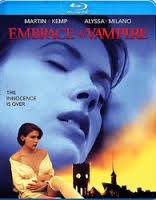 EMBRACE OF THE VAMPIRE

Alyssa Milano gets naked. A lot.

There, that’s the only thing anyone who has ever watched this movie remembers, because that’s the only thing in this melodramatic, drawn out bit of vampire erotica that’s worth a damn. Yes, really. So if you’re into seeing Alyssa Milano getting naked. A lot. On an unrated Blu-ray, then this is the disc for you. But just in case that sounds good to you and you have yet to watch this movie, let me give you a brief tour.

An old vampire misses the woman he loved back in ye olden times before he was turned into a bloodsucker. He calls out one night, with psychic powers I guess, and he is answered by a young, chaste, virginal college student named Charlotte, who is played to nubile perfection by former Who’s the Boss teen star, Alyssa Milano. For the next three nights, the unnamed vampire (yep, he’s just called ‘vampire’ in the credits) and Charlotte have a dream romance. By that I mean that the horny Drac and her do the nasty, but only in her dreams. At the end of the three nights, the vampire plans to make the young woman his for all eternity. Standing in the bloodsucker’s way is our square-jawed hero; Charlotte’s painfully bland and utterly forgettable boyfriend. As the story goes, little miss raised by nuns (no, really) starts getting corrupted by the vampire’s sexy influence. She begins looking at dirty pictures, smoking cigarettes, taking nude photographs, and even engaging in some light girl and girl action. All the while ignoring her pent up boyfriend. Poor meathead.

Look, the only thing this movie has going for it is Alyssa Milano’s very nice rack. That’s it. This is basically softcore, Skinemax fare and nothing more. This vampire movie is never once frightening in the least, the characters are paper thin at the most, and while there are some attempts at humor, they all fall flat. But yes, if you want to see Ms. Milano’s breasts a lot, then this is the movie for you.

For an extra bonus, keep an eye out for Jennifer Tilly as a very busty she-vamp. Sadly she does not get naked. Oh, and there is a hilarious attempt at eroticism that falls completely on its face when the vampire starts making out with a door. Yes, a wooden door. Not arousing in the least, but it did make me laugh out loud.

There are no extras or special features on this new Blu-ray from Anchor Bay. I guess they knew like everyone else that there were only two reasons anyone would want to watch this movie. Since Alyssa Milano has all but disowned this movie, they chances of them getting any extra special air time on here was always nonexistent.