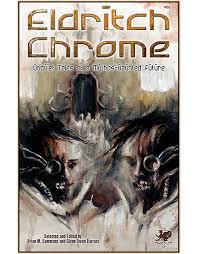 I’d been anticipating this release for some time, being a fan of both Lovecraft and cyberpunk. There are some essential shared concerns between the genres, and some essential differences, and the attempt to merge the two is rich with possibilities. Protagonists in both genres tread in hallucinatory landscapes, deal with entities that are fundamentally alien and unknowable, and confront the limitations of human knowledge and understanding. Characters often cannot trust their own senses and memory. Cyberpunk characters often inhabit a paranoid dystopian world and end unhappily. There’s also a long tradition of biological implants and experimentation within the Cthulhu literature that may be weirder than the implants found in cyberpunk, but still evoke some of the same ideas and concerns.

On the other hand, there are some inherent philosophical differences between the genres, and it’s a question as to how well the two can coexist in the same story. Mythos fiction is oriented toward a nearly infinite past and prehumen alien history. Human history and all of our works, including science, are insignificant on that scale. Part of the appeal of cyberpunk has always been a degree of fetishizing the cutting edge of technology. No matter how ugly the vision of the future, there are elements that make you say “damn, that’s cool.” Cyberpunk culture is about the future and reinvention. It’s the past that is irrelevant. And last, in cyberpunk, sometimes the stars align just right and the protagonist wins against the odds. Nothing good happens in Mythos literature when the stars are right.

There have been other anthologies of Mythos science fiction (Cthulhu 2000 and Future Lovecraft are two excellent volumes), but I am unaware of another anthology or collection that specifically mixes Mythos and cyberpunk themes. (There have been RPG offerings. Cthulhupunk and some elements of the Delta Green universe. Shadowrun played with the right slant, can approach that territory). William Gibson’s Hinterlands is perfectly Lovecraftian in tone, with humans struggling to comprehend a cosmic anomaly. It hints at the vastness of the cosmos, and experiences so alien that they break the human mind.

So what happens in this particular experiment? I would say that across the anthology, the Lovecraftian element soundly triumphs over the science fiction element. Technology collides with eldritch forces, and is consistently on the losing side. At most, cyber interfaces and computer networks simply give ancient evils a new route through which to corrupt and destroy us. And perhaps that’s the overall philosophical point. What remains after reading Eldritch Chrome is an enduring sense that no matter how cool the gadgets get and how smart they may make us, we’re all still just meat, and our minds will never be able to comprehend the horrors of the indifferent universe. It may be a byproduct of this obvious outcome, but I was left with the impression that there was very little cyberpunk in some of the stories. Throwing in some implants doesn’t necessarily make a story cyberpunk any more than adding gears makes a story steampunk. That said, there are some that succeed in the merger. Symbios by William Meikle finds the sweet spot – a dark piece filled with underground bioengineering that hits the right tropes in both genres without being derivative. Real Gone by David Dunwoody and Cleanse by Carrie Cuinn also work well as cyberpunk/Mythos mashups. Of the other stories that are more clearly Mythos science fiction, there are also some very good pieces. Some of the contributors took advantage of the opportunities for the interplay between non-geometric hyperspaces and the theoretical dimensions of cyberspace and of modifications both cybernetic and alien. There are some clever twists – stories that set up and then play upon the reader’s expectations. A few of these telegraph their ending and become no more than clever by the end.

Eldritch Chrome is an interesting blend of Mythos and science fiction with some strong stories. There is a range of styles and voices, and there’s plenty of variation in the stories presented. They tend to the dark, with strong noir influences. Fans of science fiction horror will find a lot to like in the volume.