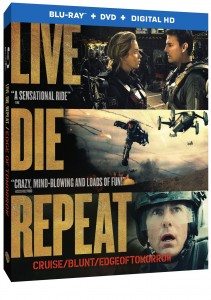 What the hell is Live, Die, Repeat?

Okay, let’s get to the elephant in the room right off the bat. It is painfully obvious to this reviewer that Warner Brothers wants you to forget there was a movie called Edge of Tomorrow out this year, and they want you to think its Blu-ray release is a brand new thing. That has to be the case. In all the press releases I got about this movie, Live, Die, Repeat was in the subject line. Not Edge of Tomorrow. All the ads for this BD release, and the cover itself has LIVE, DIE, REPEAT in big, bold, letters, and then in a much smaller font, shoved in a cover, is the actual title of the movie. Even the damn discs have Live. Die. Repeat/Edge of Tomorrow. Yes, the tagline comes prominently before the title of the movie, and I have never seen that before. And I really can’t wrap my mind around it, because I loved Edge of Tomorrow, damn it.  Oh and let me head off all you Tom Cruise haters off at the pass, no this wasn’t a perfect movie, but so very few films are, but any of the few flaws the film had could not be laid at his feet. So deal with it.

Our story starts with Tom’s character who is a smarmy PR mouthpiece and poster boy for a desperate war where humanity is trying to fight off a massive alien invasion. Far more comfortable behind the camera, many miles away from any battle, despite being in the army himself, he is unwillingly thrust into the thick of the fight during a D-Day like beach invasion, and he promptly dies.  End of movie, roll credits. Yeah, I never said it was a long movie, did I?

Wait, no, that doesn’t happen. For some odd (hmmm, you could even call it ‘alien’) reason, after dying, Tom goes back to the morning of the invasion, where he has to relive the battle again, and experience a new, horrible way to die. Then he goes back to the start of the day again and gets to die another way. And then it happens again. And again. On and on it goes, a sort of action packed, and often equally as hilarious, Groundhog Day of a war movie, until he meets a female soldier, another poster boy…er….girl for the war, who tells him, just before they both die, “come find me when you wake up.” So obviously, she knows that out hero is caught in a Mobius strip of time that he can’t escape, but why? And how can these two use that temporal hiccup to their advantage in this fight against a nigh unstoppable alien force?

This is another mankind at war with invading aliens movie, but what sets it apart is the neat gimmick that Tom is stuck in a loop where if he dies, he goes back to the start of the day he died. Because of this, his cowardly and green as hell character goes through an amazing transition into a badass war machine that would make Rambo proud. There is a neat mystery to unravel, good comedy bits (most of which come from watching Tom die over and over again – so hey all you Tom Cruise haters, maybe there’s something for you to like in this movie after all?), and lots of sci-fi action. The special effects are very well done, the direction more than competent, and all the actors do a good job. While there is one or two plot holes here, as there are with 98% of most time travel movies, they never once got in the way of me enjoying this movie, and unless you are specifically looking for nits to pick, they won’t hamper you, either.

As for the special features on this new Blu-ray from Warner Brothers, there are four featurettes  to be found here: “Operation Downfall,” “Weapons of the Future,” Creatures Not of This World,” and “On the Edge with Doug Liman.” All together these run over an hour, with the longest, by far, being the profile of director Liman. After that, there over seven minutes of deleted scenes and, well, that’s it. So the disc isn’t exactly bare bones, but I do wish there would have been more special to these features.

Live, Die, Repeat…damn it, Edge of Tomorrow is a fun, and often funny, sci-fi action epic that I thoroughly enjoyed. I have no idea why Warner Brothers is trying to burry to original title, but no matter what you call it, be sure to give it a watch. I’m betting you’ll like it. A lot. Consider it highly recommended.