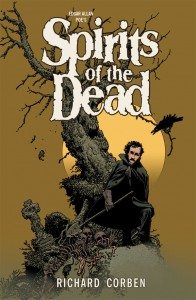 According to Albert Camus, “A guilty conscience needs to confess. A work of art is a confession.” Many critics interpret the works of Edgar Allan Poe to be a confession—a means of purging himself of the shame he felt regarding his wife’s untimely death and his vices. As Spirits of the Dead is an adaptation, it meshes Poe’s guilt with Richard Corben’s vision. The result: new interpretations that sometimes suit, at other times rattle, the familiar frames provided by one of the founding fathers of the horror genre.

The art is extraordinary, beginning with the front cover, which depicts Poe like most of us have always imagined him: restlessly scavenging for peace in a night teeming with mystery and dread. The skulls at his feet represent the waking nightmare that was his life: a nightmare he fabricated via personal demons and sad choices.

The interior art is equally wonderful. Some of the characters are drawn with a bit of humor. For example, the narrator, Mag the Hag, provides a Crypt Keeper-esque blend of satire and disgust. “Fall of the House of Usher” contains a Roderick who resembles an aging rock star. His sister, Madeline, looks enough like him to evoke sympathy. Most of the female characters are generously endowed with ample bosom, and the nude females – even the corpses – have enviable figures.

The colors are rich and the panels fully saturated. The lack of empty visual space gives a frenzied feel to the horror, much in the way that a soundtrack enhances the tension of a thriller film.

Corben’s signature style – familiar to those of us who enjoy Heavy Metal Magazine, DC Comics, and other Dark Horse offerings – is omnipresent. He interprets the grotesque in a much more straightforward manner than Poe did in the original tales and poems.

The most interesting is his take on “The City in the Sea.” Corben gives it a complex intensity that is not explicit in Poe’s poem. Corben adds racist undertones reminiscent of Melville’s Benito Cereno. It is a compelling lens through which to view the primary source.

Corben presents only the opening lines of poems. As a Poe purist, I would have liked more of the lyrical majesty and less veering off the path of the original vision, especially with a masterpiece like The Raven. Fans of old school style comics and horror will really enjoy this book. Corben’s enthusiasm for the material did encourage me to return to the original poems and stories for a hundredth read.