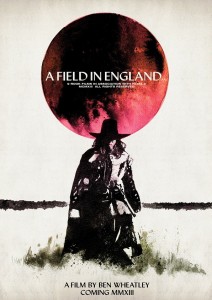 Drafthouse Films, the film distribution arm of the Alamo Drafthouse Cinema, announced today the acquisition of North American rights to original horror film A Field In England. This is the fourth feature film from writer/director Ben Wheatley, whose credits include the highly acclaimed tour-de-force thriller Kill List, the Edgar Wright-produced 2012 Cannes Film Festival selection Sightseers, and a segment in anthology horror film The ABCs of Death. Billed as “a psychedelic trip into magic and madness,” A Field In England follows a group of English Civil War soldiers in the 17th century who are captured by an alchemist and led into a vast mushroom field, where they fall victim to violent and nightmarish forces. A theatrical and VOD release is planned for 2013.

With a new feature, the 8-figure-budgeted sci-fi/action epic Freak Shift, currently in pre-production, Wheatley and producers Claire Jones & Andy Starke assembled A Field In England with financing via Film4′s talent and ideas arm Film4.0 headed up by Anna Higgs. The film stars Reece Shearsmith (“The League Of Gentlemen”) and Kill List’s Michael Smiley and features Julian Barrett (“The Mighty Boosh”) in a small role.

Wheatley’s work has been lauded by both critics and moviegoers, placing him at the forefront of a new wave in contemporary cinema emerging from the festival circuit dubbed “art-house horror.” Chris Hewitt of Empire Magazine has proclaimed, “In only three years, Ben Wheatley has gone from unknown to one of the UK’s most exciting, hilarious and most violently disturbing filmmakers.”

“When we world-premiered Ben’s debut feature Down Terrace at Fantastic Fest in 2009, he deservedly won top prize, the AMD Next Wave award. We knew we were witnessing the debut of a major talent,” says Fantastic Fest Founder and Drafthouse Films CEO Tim League, “Ben represents the ideal filmmaker we love to support at Drafthouse Films and fully embodies our unique brand – a visionary who compounds genre themes and artfully unusual sensibilities. We are incredibly honored to be working with him to release A Field In England.”

“I’m very excited to be working with Drafthouse on A Field in England. They are a great company who have released some groundbreaking films over the last few years. I went to Fantastic Fest in 2009 wanting to visit a cinema I’d read about for years (and to buy up as many Mondo posters as I was allowed to take on the plane); I came away with the start of a career. Drafthouse is a name that will always be special to me, and I’m really happy to be working side by side with them,” says Wheatley.