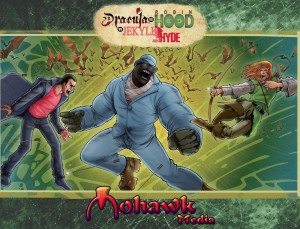 I can honestly say that these are three characters I never envisioned together in one story.  Read on and see what it’s all about:

Eco Comics has decided to celebrate Halloween by announcing its next graphic novel, Dracula vs. Robin Hood vs. Jekyll & Hyde.

Dracula vs. Robin Hood vs. Jekyll & Hyde is written by Chris Bunting and illustrated by JL Czerniawski.

The graphic novel assembles the first series of the acclaimed comic book of the same name. It will also feature new material, including an exclusive cover by Czerniawski. As in all titles by the award-winning ‘green’ publisher, it is paperless-exclusive.

Bunting says: “You get three legends for the price of one: A Robin Hood who is anything but a cheesy gallant hero. A Dracula with a lot of skeletons in his closet, and a leviathan Hyde who could smash the Hulk.”

“This story best exemplifies the overall approach of Eco Comics. We are interested in bringing readers entertaining yarns, harking back to the era when comic book showdowns generated as much excitement as any publicity stunt.

“Supernatural, sci-fi, superheroics – and scraps – this story has it all.

“And, courtesy of the numerous horror genre stars, plenty of gore.”

The title also stars other famous faces such as Frankenstein, and a long overlooked character from the Robin Hood ballads.

A preview of the new graphic novel cover art is available on blog.mohawkmedia.co.uk and facebook.com/ecocomics

Dracula vs. Robin Hood vs. Jekyll & Hyde: the graphic novel will be available to order in various digital formats, including via the Eco Comics store: www.mohawkmedia.co.uk/ecocomics for $2.95 (approximately £1.80). The launch date is set to be announced soon.