Dolly and Other Stories 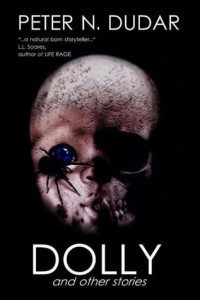 Dolly and Other Stories

Peter N. Dudar’s Dolly and Other Stories is essentially about weaving horror from the commonplace. His two novellas and five short stories begin, as the end notes suggest, in a memory, an experience, a moment—whether as uneventful as noticing oddly behaving people at a garage sale or as world-altering as watching the collapse of the World Trade Centers.

His tales begin in this world: a child of divorced parents concentrates her love on her Dolly, unaware that it is itself a means of manipulating one parent against another; a woman’s younger brother comes to stay with her after his girlfriend has told him to leave; late at night, a man stares fixedly at a  half-visible image on a porn channel; a social worker arrives at an Ethiopian village, bringing supplies and medicine for a starving people; two men have early morning coffee at a topless donut shop; a young couple set up for a garage sale; two roommates joke with each other about one’s sexual exploits.

Then, gradually and sometimes almost unnoticed, the stories shift. Reality takes a turn to the left and horror settles in, in the process bringing madness, terror, and death. By the time the stories end, characters and readers alike have been introduced to the unspeakable, the unknowable, the uncanny.

Dudar’s storytelling skills are highlighted in the longer pieces, “Dolly” and the entirely unexpected “Closet Case.” He maintains interest in multiple characters and simultaneous plotlines while never losing sight of the ultimate revelations and the ultimate horrors. And in each case, the stories are not over until the last line, the last gasp from the storyteller.

The shorter pieces, “Perversion and Channel 78,” “Unnatural Selection,” “Coffee with While Devil,” “The Garage Sale,” and “Clown Smile,” are perforce tighter, more concentrated on a single theme, a single effect. The note to “Unnatural Selection,” in fact, suggests that it was originally conceived as a “shaggy-dog story” hinging on a single outrageous pun. If so, its appearance in the collection, surrounded by darkness and weirdness, does much to provide it with a sense of maturity and focus.

Often, single-author collections present stories that all sound vaguely familiar, clearly the product of a single imagination. Dudar’s tales may sound similar in terms of word choice, sentence structures, and the other minutiae that identify a work as by this author and not by that; but in the things that count in storytelling—plot, characters, themes, imagery—each works independently, each is a voyage into a different kind of darkness, and each stands as a tribute to Dudar’s skill and imagination.