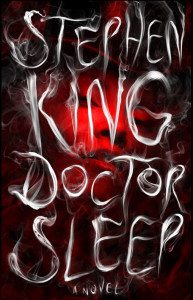 Stephen King’s not there. Or is he?

My introduction to Doctor Sleep came when I attended the Savannah Book Festival on February 19, 2012 and King gave a live reading from the sequel to The Shining (1977).

And as I took King’s picture from the crowded auditorium, and then reviewed the image in my camera, I couldn’t see the man onstage in the image review screen. My heart skipped a beat. King’s a ghost–and then I realized it was just a trick of the lighting and the flash, and yes constant reader, Stephen King actually photographs, even in Savannah. Whew.

Stephen King’s Doctor Sleep is one of the most anticipated sequels to come out this decade, and it brings the inevitable comparison of early King to later King. I understand the compulsion to compare, but it’s tricky since Stephen King is a different writer now compared to thirty five years ago, just as we’re all different readers.  Like everyone else, King changes over time, just as individual reading tastes change. It’s not that they’re better or worse but simply different.

One thing remains constant. Joe Hill King (author Joe Hill of NOS4A2, the author’s son) is the dedicatee of The Shining (1977), and in that original dedication King says “This is for Joe Hill King, who shines on.” In Doctor Sleep, King refers back to Hill and uses Hill’s Charlie Manx character from NOS4A2, as Manx shares an unpleasant past association with Dick Halloran from The Shining.

Poor Dick Halloran catches grief from both the father and the son’s creations. There are several other intertextual King references as well, including an Empty Devils reference from Lisey’s Story.

King is back in familiar territory with Doctor Sleep since a large part of the novel involves a grown up Dan Torrance’s struggle with alcohol abuse and addiction, something King knows about firsthand, and these instances of Dan’s struggle to leave the past behind him rang true to me.

Abra Stone is the child psychic that Dan Torrance tries to save from the True Knot, a group of psychic vampires who feed on youngsters like Abra and a young Dan Torrance. “The True” feed on living psychic energy (at the expense of the living host) and even save and store the energy for future consumption.  The True Knot’s dwindling psychic reserves seem like a political statement by King about the potential for another looming US oil crisis since The True stores their psychic energy in metal canisters as reserves. The True are a fairly large, powerful (and ancient) group, and Crow or “Crow Daddy” is Rose’s second, and the most clearly drawn antagonist after Rose herself.

I have a few quibbles about the storyline and the plot which shouldn’t prevent anyone from enjoying Doctor Sleep. At one point Dan has to do old fashioned Internet research to determine if Dan’s mentor Dick Halloran is still alive. Given the fact that Dan and Dick had such a close psychic relationship, it seems likely that Dan would have known if Dick had passed given the two men’s mental gifts without having to do Internet research. Also, towards the end of the story, Rose and her True Knot make a few questionable decisions that don’t seem in keeping with a dangerous cabal of outcasts that have been able to preserve themselves and thrive for centuries.

On a visceral level, King delivers with Doctor Sleep. The entire read, particularly the last hundred or so pages, the pacing is relentless and you plunge headlong into the story. And towards the end, when Dan Torrance confronts Rose the Hat, one of Dan’s allies gives the most unexpected distraction technique that I’ve ever seen in a novel. The act itself isn’t that unusual, it’s just that it’s delivered in such a random, off the wall fashion by an unexpected character.

Will Patton (After Hours, No Way Out), narrates the audiobook version of Doctor Sleep and gives a riveting performance. My only quibble with Patton’s read is that he makes Doctor John sound more than a bit constipated, but to his credit he nails the individual voices, making them unique and allows King’s work to come alive. Ever since Patton read The Killer Inside Me by Jim Thompson, you know you’re in good hands with Patton as the narrator. King reads the introduction and afterword, and it’s nice to have the actual author inserted into this part of the audio for a greeting and a fond farewell.

In addition to the trade edition published by Scribner, Cemetery Dance published an illustrated limited edition of Doctor Sleep that comes in three different states.

The Cemetery Dance limited edition is a 750 copy tray-cased edition and thing of beauty, retailing at $450 (out of print) and signed by the author and artists Vincent Chong and Erin Wells. A work of beauty and worth the money if you are able to find one on the secondary market. Vincent Chong’s artwork is perfectly dark and appropriate for the subject matter.

The gift edition is limited to 1,750 copies, slipcased and has endpapers illustrated by Glenn Chadbourne. Although out of print, it originally retailed for $95 and is unsigned.

I have not been able to review Cemetery Dance’s lettered edition first hand, but it is limited to 52 copies and housed in a custom deluxe box. Also out of print, the lettered edition retailed for $2,500. However, if I had an extra twenty-five hundred lying around free and clear, it’s a book I’d think about adding to my Stephen King collection that will likely increase in value over time.