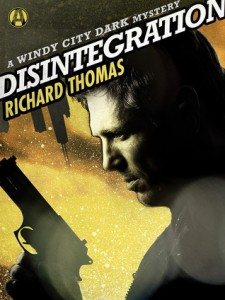 The first half of Richard Thomas’s Disintegration: A Windy City Dark Mystery lives up to its subtitle. It is an extremely atmospheric tale set in what could called a dark-reality version of modern Chicago. It is the Chicago of our world, but only if you include the dark, gritty and nasty bits. Things are violent, surreal, and at times become hallucinatory, as we are introduced to the narrator of the story, a man for whom nothing is usual or certain, including his name. He works for a man he calls Vlad, running errands at odd intervals to nefarious ends.

The protagonist goes through the motions of his bizarre life in the first half of the book, letting the reader know what normal is for him but explaining very little else. And just when things could get confusing or frustrating for the reader, knowing so little, the story starts to unfold, cracks are filled in and realities found. Thomas’s pace is expert as he allows the narrator to clear up the mysteries of the book for himself, relating them to the reader as he does so. The women in the narrator’s life and his cat anchor the him to the realities he, and the reader, are ultimately searching for.

Disintegration is an absolutely fantastic mystery and a gnarly nihilistic noir with strong horror elements. The voice of the story is crystal clear, even when the events of the book are not, and the prose is so sharp that it feels like it was written with a scalpel. It is hard to put this book down, and by the time the reader hits the halfway point the choice will be completely out of their hands. The book demands to be finished in one or two sittings, and the reader should be more than happy to oblige.