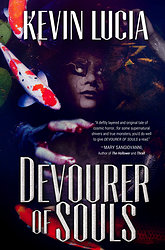 Kevin Lucia’s debut collection, 2013’s Things Slip Through, was a fine set of stories set in the fictional Adirondack town of Clifton Heights. Framed by a wraparound story that connected each piece to form something potentially much bigger, it introduced its readers to an intriguing mythos. Devourer of Souls is set up in much the same way, but connects two novellas rather than a host of short stories. A new set of characters is introduced, with a few familiar faces showing up here and there.

“Sophan” sees a return to Clifton Heights. Set in the late 80’s, it’s supernatural horror of the classic, slow-burn variety. The narrator, Nate Slocum, recalls the strange, life-changing events of one boyhood summer, beginning with the discovery of a seemingly innocuous game. Playing the game has dire consequences, and souls are at stake when the secrets concealed by a kindly old man and a grudge-bearing boy collide. Lucia skillfully incorporates PTSD and abuse into eldritch occurrences, and here, as in Things Slip Through, the supernatural and human horrors are bound inextricably.

“The Man in Yellow” is set in Tahawus, a small town north of Clifton Heights. A deeply unsettling story of faith tested and twisted, it concerns a stranger whose sermons reach straight into the truest desires of his new acolytes. His motives, of course, are decidedly nefarious. Much of the prose is dreamlike, as the insecurities of the protagonist draw him into a crippling darkness he may never return from.

A high level of suspense is maintained in each novella, and the feeling of dread is strong, particularly in “The Man in Yellow” (as well as the brief coda that follows). There’s a vaguely moralistic tone to the stories but, as one character remarks, “This town’s grayness is something I’m still getting used to.” On a technical level, the writing is tight and the plots well-constructed. Devourer of Souls further cements Kevin Lucia as a distinctive voice in horror and the fantastic, and it’s as good a place as any for new readers to jump in. Recommended.