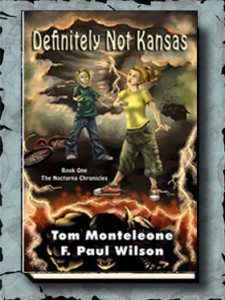 Middle grade and YA are tricky markets to get right, at least with the intent of crossover appeal to adults. If a book is too juvenile, too shallow, or full of romance or typical teen angst, it’s unlikely to be one of those enduring works that successfully cross the age barrier. Harry Potter. His Dark Materials. The Chronicles of Narnia. These are the kind of universally well-regarded classics that crop up only rarely. With Definitely Not Kansas, the first book in a projected trilogy called The Nocturnia Chronicles, genre heavyweights Tom Monteleone and F. Paul Wilson have set out to write a middle grade/YA novel that captures the interest and imagination of readers of all ages, and in that regard they’ve succeeded.

Emma and Ryan, in search of their missing older brother, get sucked into a tornado and end up in Nocturnia, a world occupied and ruled by monsters. They soon learn that in Nocturnia, their own kind are either sold as slaves or as part of the food supply. Attempting to avoid either of these things, trying to figure out how and why they ended up here, they’re unwittingly drawn into a conflict and adventure the likes of which they’d never dreamed possible.

The pace is slow at first. The authors take their time introducing and developing the characters of Emma and Ryan, a truly endearing pair of siblings. Ryan is logical and inquisitive to a fault (his mouth gets him into trouble more than a few times), while Emma is more reckless and impulsive. Their strengths and weaknesses play off each other to great effect. Anyone who grew up with brothers or sisters will smile at their bickering.

Things move swiftly when they get to Nocturnia. The world the authors have created is complex and compelling, with its own nations and politics, steam-powered vehicles and wide array of monsters. The general rules for vampires, zombies, mummies, and other beloved horror staples are tossed aside here, the authors changing things up and making them their own. There are also some unique monsters built from the authors’ imaginations that mesh well with the reimagined classics. It all works well, including the way the two worlds are connected.

The novel gets tense now and then, but there’s nothing here that’s likely to scare a seasoned horror fan. There are some grotesque aspects to life in Nocturnia (not the least of which is a facility that makes disturbing use of some blood-sucking flowers), but the most visceral parts of the action tend to happen out of Ryan and Emma’s view. This works to the story’s advantage. The authors are adept at describing sounds or shadows and leaving the rest to the reader’s morbid imagination.

Readers will root for (and against) the characters, enjoy the abundance of humor, the world-building, and the fresh spin on many iconic monsters. Definitely Not Kansas is a book that anyone can enjoy. Above all, it’s sheer fun. The trip to Nocturnia is well worth the price of admission, and a cliffhanger ending ensures another visit when the sequel comes along.