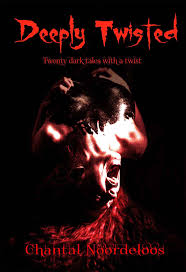 In Deeply Twisted, Dutch author Chantal Noordeloos presents readers with a world where hidden—and not so hidden—fears come to the surface.  It is a darkly elegant, and often extremely violent, world reminiscent of that of myth, fairy tale, and legend.  In these twenty stories, some of them short enough to be considered “short shorts,” others more developed with separate sections, readers encounter various types of evil, often disguised by surface beauty or innocence. These stories are indeed twisted both in subject matter and in plot. Although several of these stories have been published elsewhere, Noordeloos weaves them together with the new material in a way that produces a collection that is cohesive while still keeping the integrity of the individual stories. A few of the stories connect, serving as prequels or just providing more information, but they are not organized chronologically, so one of the joys of this book is that the reader is encouraged to reread even before finishing the collection. Even those stories that are not directly related may include variations on a theme which can make the reader stop for comparison or reflection. To get the full impact of these connections, the reader should read the stories in order rather than randomly sampling. After a first read, playing with the order of the stories might be fun!

In this exploration of evil and fear, Noordeloos is at times reminiscent of Nathaniel Hawthorne—which may seem like an odd comparison.  However, like Hawthorne, Noordeloos knows that evil can lurk in any human heart and that appearances are deceiving.  If anything, these stories show the darkness that is beneath the pretty, the innocent, and the saintly. And in several of the stories, those who appear to be monstrous are actually the ones holding evil in check.  Also, like Hawthorne, at least two of Noordeloos’ stories often seem to be fables where those who commit evil for greed have to suffer the consequences, and here those consequences are supernatural and very scary.

Many of the settings of these stories are ordinary but are imbued with the extraordinary or the nightmarish. For example, in “When the Bell Tolls,” a very ordinary town suddenly has a very extraordinary clock. In “The Dispensation of Jack Harrington,” there seems to be an ordinary convention with normal convention activities; however, these conventioneers are far from ordinary. “Dinner Date” seems to be an ordinary dinner party with ordinary friends in an ordinary town, but in this case evil lies beneath the surface of these ordinary people and only absolute evil can sort them out. In “Soulman,” a story that could take place on the streets of any American city, a mysterious stranger, who shares characteristics with a popular Norse deity, walks among the homeless. Other settings are more specific. Two stories, “The Widow” and “Deeply Twisted” are set in the Netherlands.  However, this setting is more a place of dark fairy tale than the modern country.  The village of these stories is a place of evil, where a darkness or curse necessitates the death of many of the village’s children.

Noordeloos has commented on her webpage that she is scared of just about everything.  In this collection, readers are presented with a wide variety of horrors: zombies, serial killers, witches (or supposed witches), evil children, cannibals, grave robbers, evil storms, and various demons and monsters.  She taps into the childhood fear of something truly scary being under the bed.  Even gold turns out to be a catastrophic horror. The ultimate terror in this collection is Lovecraftian, and Noordeloos does a fine job of making it universal and final.

In the midst of scaring her readers in multiple ways, Noordeloos also explores relationships, especially those between parents and children, between siblings, among friends or even between captor and captive.

Readers who are looking for a thrilling ride, who like their blood and gore handled with a delicate touch, and who enjoy a deeply twisted plot will not be disappointed in this collection.  They may come away with no desire to be a grave robber, may have expectations that a god or a devil might just walk among us, and may look more closely at their children, searching for the hint of something evil within.