Welcome to our new twice-monthly feature, DEEP CUTS.  Each entry will have a link to a free-to-read story and then a short interview with the author.  By focusing on just the story, it’s our hope that the readers will be able to find and engage with new authors, connecting with their work in a way that more general interviews don’t allow.

For our inaugural edition, we’re honored to welcome Nathan Ballingrud.  Today’s story, “The Monsters of Heaven,” is a beautiful and unsettling story about grief and a plague of angels.  Nathan’s crystal clear prose and the human drama at the center of the story keep it firmly grounded against the fantastical backdrop and the deep emotional undercurrents.  “The Monsters of Heaven” won the 2007 Shirley Jackson Award for Short Story and was also collected in North American Lake Monsters (Small Beer Press 2013), which itself co-won the 2013 Shirley Jackson Award for Best Single Author Collection.

Go ahead and read “The Monsters of Heaven” here, because **SPOILERS FOLLOW**

Hellnotes: What sparked the idea for “The Monsters of Heaven”? A number of your stories involve supernatural elements at the periphery, but are grounded in basic human conflicts. Which of those elements came first for this story? 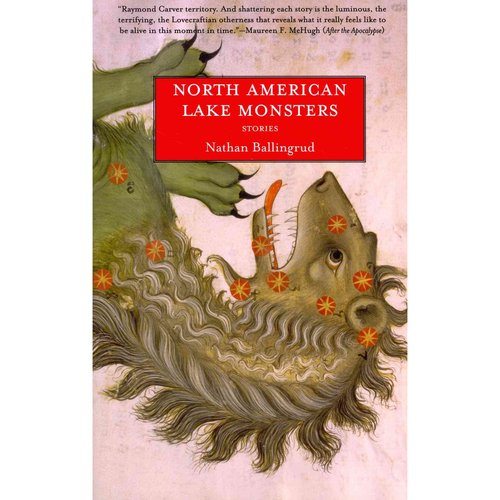 Nathan Ballingrud: With this story, the human element came first. I was thinking a lot about the ways love warps us, and can make monsters out of us (that’s a pretty consistent theme in North American Lake Monsters), and I had the closing image of this story in my head: a man dreams of the remains of his son, and he accepts it as a source of peace. It seemed so counterintuitive, and I challenged myself to earn a payoff like that. Sometimes the only way we can move on from a profound tragedy is to find a way to forget it; and that forgetting, in itself, can be an act of violence.

HL:   On a second read through, I was surprised at how much of the resolution is foreshadowed, even as early as the fourth sentence (“The more blood he spilled, the further removed he became from his own guilt”). Paying attention, there are lots of references to blood in Brian’s mouth – when Amy bites Brian’s lip, when Brian bites his own tongue, after Tommy beats Brian – but none of these have the same apparent restorative effect as the angel’s blood. Possibly the key difference here is that all the prior blood was Brian’s own, but that resolution couldn’t come from within himself. How much of this symbolism was intentional? Is this something that grew as you first wrote the story, or did it develop during later drafts?

NB: That kind of stuff all happened subconsciously. I didn’t think about any of it while I was writing. When you hit the vein of a story, you’re not only writing the events, you’re inhabiting its atmosphere, you’re apprehending the whole world from its particular angle. If you’re fortunate, one of the side effects of this can be the alignment of metaphors. “The Monsters of Heaven” happened mostly in one draft, but it’s important to add that it was a slow draft. I usually take my time writing stories, and I suspect that gives the subconscious time to organize these themes, so that they come out in the writing organically, often without my direct knowledge.

HL: By the end, there’s a suggestion that Brian and Amy are moving on, but it doesn’t come from forgiveness as much as forgetfulness. They achieve some measure of peace, but it’s not clear that that they’ve done a good thing – in fact, they might have done a terrible thing. How do you think readers might best approach this ambiguity?

NB: That’s exactly what I was going for. In my mind, it’s a happy ending. They have rediscovered each other and potential for future happiness. But they paid a terrible price for it. I would never presume to advise a reader on how to approach the ambiguity in this story, or any element of any story, for that matter. Readers bring their own interpretive apparatus to fiction, and it isn’t any business of the writer’s to try to influence that.

HL: While the story is told in past tense, the very last two paragraphs switch to present tense. This stylistically distinguishes Brian’s dream, but it carries over into that last sentence and, it seems, the waking world (“By the time he wakes, he has already forgotten it.”). What was your intent with this shift?

NB: That’s another example of an unconscious decision. I didn’t have a particular intent. It was the right feel. It felt, to me, like air being let into a room, or a launch into the air. I know that’s pretty vague, but I don’t know how better to say it. The characters had found their way out of something. They achieved something important to them, even if it made them into monsters. The change in tone that comes with a tense shift helps to convey that, I think.

NB: Most of the other stories in North American Lake Monsters treat similar themes. When Small Beer Press asked me to come up with a simple description for the collection, I said that they were love stories and monster stories at the same time, and I think that’s true. “You Go Where It Takes You,” “Sunbleached,” and “The Good Husband” in particular strike me as stories which share a lot of emotional ground with “The Monsters of Heaven.”

As far as stories that are quite different, I think I’d point readers to some of the ones I’ve recently finished, which have not yet been collected. After North American Lake Monsters came out, I made a conscious decision to shift my footing, to exercise different muscles. It’s all still dark fiction, to be sure — that’s my DNA — but they’re not grounded in realism to quite the extent the stories in the book are. I’d suggest “The Atlas of Hell” (Fearful Symmetries, edited by Ellen Datlow), which is a story about Louisiana gangsters and their entanglement with an artifact from Hell; “The Diabolist” (Monstrous Affections, edited by Kelly Link & Gavin J. Grant), about the daughter of a recently deceased Satanist; and “Skullpocket” (Nightmare Carnival, edited by Ellen Datlow), which is about some ghoul children crashing a regional fair in the early part of the 20th century. They’re all quite different in tone from the stories in the book, but they share the same genetics, so it’s my hope that they’ll still appeal.

My newest work is a novella called “The Visible Filth”, coming in February from This Is Horror, which feels to me like something more in step with the stories in the collection.

Nathan Ballingrud lives in Asheville, NC, with his daughter. He’s the author of North American Lake Monsters, which won the Shirley Jackson Award, and was shortlisted for the World Fantasy, British Fantasy, and Bram Stoker awards. He’s writing more stuff.

Find more from Nathan at his blog and on Facebook.  North American Lake Monsters is available on Amazon and other booksellers.  Preorders for “The Visible Filth” (which include some excellent bonuses) are being accepted through This Is Horror, but end on January 30th, 2015.

NEXT TIME:  In our next entry, we’ll discuss Michael Wehunt’s 2014 story “Bookends” (available in The Journal of Unlikely Entomology here).