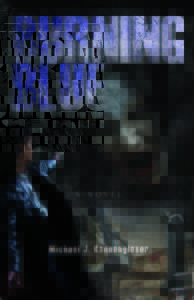 Decent Hill is pleased to announce the official release of author Michael J. Kannengieser’s brand new novel Burning Blue. Kannengieser is a retired NYPD officer and New York native. He is also author of the critically acclaimed police thriller The Daddy Rock. Burning Blue is paranormal police horror novel that delivers a wild, unpredictable, and scary ride that promises to keep the reader turning the pages well into the night.

In Burning Blue, Jack Chase is a cop who betrayed his badge when he took money from a drug dealer. Only his late father’s legacy as a department chaplain prevents him from being prosecuted. When Jack is shot in the line of duty, he has a near-death experience. What he does not see, however, are the Pearly Gates – Jack goes to Hell, literally. When he awakens, Jack is haunted by images of Hell and demons taunt him both in his dreams and while he is awake. Now he must he escape the nightmarish images that haunt him and also get his personal affairs in order.

In this dark, paranormal horror story, Jack must fight to save his life, redeem his soul, and reunite with the love of his life. “What stands out for me in Burning Blue is the theme of redemption,” says author Kannengieser in a pre-release interview with Decent Hill. “I always try to have an overriding theme in my books. In The Daddy Rock, the overall theme is forgiveness. In Burning Blue, Jack Chase has done something wrong, and he seeks forgiveness for his sin, his legal troubles, and also redemption for his very soul.”

Author Kannengieser will be holding several promotional events for Burning Blue over the next several months, including book signing events at Book Revue in Huntington, NY and elsewhere, several media interviews, library visits, and numerous author appearances as part of his national book tour. Book sellers and retailers can order copies of Burning Blue through Ingram or directly from the publisher.

Decent Hill is a leading publisher of critically acclaimed fiction and non-fiction titles. We publish books under our Felsen Press and The Lord’s Press imprints, and also publish music CDs and DVDs under our Decent Hill Music label.