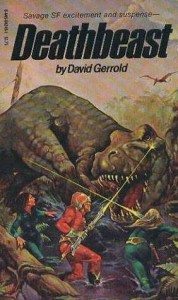 Deathbeast is science fiction. It displays several characteristics of science fiction, including beginning with a near-future technological innovation that fundamentally alters the way humanity views itself and its world. It speculates about time travel, in this case to the Cretaceous, where intrepid and otherwise hunters deploy cutting-edge weaponry (for 1978) against the greatest—or perhaps only the second greatest—predator that world has yet known, Tyrannosaurus Rex.

So why am I posting this essay on a site geared toward discussions of horror?

Well, because Deathbeast is also horror. It displays several characteristics of horror, including beginning with a small group of disparate individuals, utterly isolated and dependent upon each other, who confront something beyond their expectations, beyond their science, and beyond their understanding. It revels in blood and gore, death and destruction, even stopping at key intervals to speculate about their effects on the hunters, physiologically and psychologically. It has a “bad place,” one particular location haunted by a “monster” (and the word occurs time and again throughout); and once the group arrives there, everything becomes a struggle for survival.

As far as that goes, it is also action-adventure. It displays several characteristics of that genre, including a single-minded quest that leads the adventurers into danger after danger, with barely a breathing space between. It does not spare anyone; characters who might be expected to survive in a more leisurely story die and (in connection with the previous paragraph’s contentions) die gruesomely. For the last pages, characters literally run non-stop for their lives, setting up a cataclysmic confrontation between humans and beast that does not end until the final sentences.

In addition it is a semi-philosophical novel, with disquisitions on life and death, on love and hate, on male and female, on predator and prey. At one moment, it might take readers on an imaginative and poetic exploration of an ancient moon; at another, it might consider the complex and ultimately fatal relationship between hunter and hunted. Along the way, it reaches out to bring Melville’s Moby Dick in as allusion and as guide to theme and imagery, especially in one character’s obsession with hunting and killing the novel’s analog to the Great White Whale; it seems likely that the name of Melville’s character, Captain Ahab, was at least echoing in Gerrold’s mind when he named his alpha hunter Ethab. Yet the book also alludes to popular culture with King Kong and the moral and ethical questions the various films by that name raise.

It is in part predictive, taking early hints that dinosaurs were not sluggish, cold-blooded behemoths—as they were invariably depicted in books such as Roy Chapman Anderson’s 1953 YA volume, All About Dinosaurs—and exploring the ramifications of that shift in understanding. It predates by a couple of years the first authoritative assertions of an asteroid-caused mass extinction and thus does not discuss that; in its place the novel offers an alternative, almost mystical explanation based upon the suggestion that the human characters, by interacting with dinosaurs and introducing the giants to true fear, brought about the extinction.

It even has a touch of the romance, although the human relationships as developed are a far cry from typical. One of the most lyrical passages is indeed about romance and sex—as practiced by two brontosaurs (now more commonly called apatosaurs) in a shallow lake. And, as is the practice in many romance novels, the culmination takes place discretely, off screen.

That passage in some ways highlights why I found Deathbeast fascinating. After establishing how enormous the creatures are, using rather blunt scientific terms, Gerrold shifts unhesitatingly into a paragraph concentrating on sinuous, intertwining necks and sensuous movements. For that moment, for that paragraph, the brontos cease to be monstrous, nearly mindless lizards rutting in mud shallows and become something quite different, something almost elegant.

The same or similar effects recur throughout. The opening pages are narrated in crisp, coldly dispassionate terms, appropriate to science fiction. With the appearance of the first saurian, however, the language shifts noticeably, becoming more consonant with horror—the word itself and its cognate horrified occur frequently, always in connection with the death-dealing monsters. When he shifts language, Gerrold also shifts the essentials of sentence structure and paragraphics. Sentences become run-on or loosely connected by dashes, creating a kind of breathless terror in the reader; punctuation becomes extreme (?!!); word choice becomes heightened, almost melodramatic; and the pacing increases with the characters’ heartbeats.

No one will probably ever claim that Deathbeast is the oft-mentioned Great American Novel; it probably will never even be in contention as the Great American Science Fiction Novel. But as an early example of what is now called “cross-generic fiction,” it intrigues because Gerrold handles the various threads with ease and expertise, allowing readers a glimpse behind the story to the larger themes and “kinds” that impel it and the language required to create each.