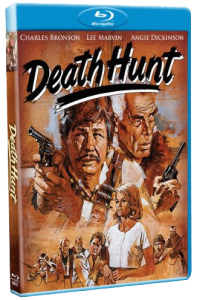 Ok, so this isn’t a horror movie, but it’s a darn good movie.  Every once in a while, I just decide that I can post what I want just because I want to.  I hope you don’t mind.  Without further ado…

I love this movie. I love this movie for many reasons. One, it’s got Charles Bronson in it. Two, it’s got Lee Marvin in it. Three, it is a period piece set in the 1930s. Four, it is based (loosely, at least) on a historic manhunt through the Canadian wilderness. Five, it is just one hell of a well written/acted/directed movie. Six, it’s the kind of action movie that they just don’t make anymore. And that sixth reason is perhaps the most important to me. I am sick of what Hollywood passes off as action flicks these days. They’re either about guys with capes and spandex, meatheads driving muscle cars really fast, or an explosion of CGI eye candy in lieu of plot or decent characters. Death Hunt is an example of a sadly dying art form: plain old good movie making.

What, you need a reason other than all those for me to review it here? OK, how about that historic manhunt I mentioned before? This movie is about Albert Johnson AKA The Mad Trapper, who was the focus of what was for a long time the largest manhunt in Canadian history and included a 150 mile foot chase through the Yukon. If you know anything about the Yukon, you know that is 100% badass. Still not enough? Well old Mr. Johnson might have been a serial killer who collected and sold his victims’ gold teeth, or he might have been a man wrongly accused. This movie assumes the latter, but if you are a diehard horror fan that only watches flicks of one genre, well I weep for you, but you can just keep telling yourself that this is a wilderness version of Silence of the Lambs or something. Oh, and it does have Death in the title, so that’s got to count for something, right?

Anyway, as for the story here, Charles Bronson plays Albert Johnson, a trapper and a loner, but he’s not all that mad. His big crime here is saving a dying dog from a vicious dog fight, but in doing so he becomes the enemy of the dog’s ignorant former owner. Not knowing who they’re messing with, some Canadian good ol’ boys (yes they have them up there too) try to get some revenge, but Albert doesn’t die that easy. And yeah, that’s a huge understatement.

Enter Lee Marvin as a crusty old Canadian Mountie who gets the unenviable job of bringing the “mad” trapper in. He knows that Albert was pushed into this corner by the idiot and his pals, but he has a job to do and he’s going to do it. But as stubborn as Albert is about staying alive, he’s equally determined to avoid capture. Thus begins that unbelievable, but real, manhunt, and this is where this movie really takes off. It is man vs. wild, man vs. man, and man vs. newfangled technology as the Mounties even called in a biplane and used wireless radios (both cutting edge tech at the time) to help in their hunt for Albert Johnson.

But perhaps the very best things about this movie is the two men starting in it. Bronson is superb as the silent, sullen guy not to be messed with and who only wants to be left alone. Lee Marvin is at his classic tough guy best as the veteran lawman who can admire and even sympathize with his quarry, but he is nevertheless determined to get his man. He is a Mountie, after all.

As cool as this movie is, the new Blu-ray from Shout! Factory has some pretty good features for a largely forgotten (or so it seems), 32 year old movie. There is a commentary track with the writers Michael Grais and Mark Victor. There is a second commentary track with actors Andrew Stevens, Len Lesser, and William Sanderson. There is a 10 minute interview with the executive producer Albert Ruddy and also a theatrical trailer. Add to that  fact that this HD transfer has this movie looking better than ever, and you have a pretty nice package.

If you are a fan of the kind of action/drams they just sadly don’t make any more, then Death Hunt is the movie for you. It’s a historic, two-fisted manhunt and revenge flick. It has Bronson and Marvin at the top of their game, and even Apollo from Rocky (Carl Weathers) and the Police Woman (Angie Dickinson) tossed in for good measure. And best of all, no capes, muscle cars, or CGI anywhere. For all of these reasons, I highly recommend Death Hunt to anyone and everyone that just likes plain old good movies.