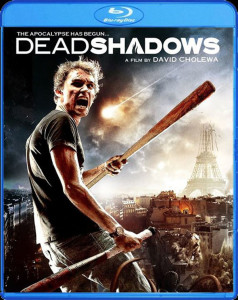 I love Scream Factory. There, I said it. No one, but no one is bringing out the horror Blu-rays like them and their devotion to classic fright flicks from the 80s is truly commendable. However, their track record when it comes to new movies hasn’t been all that stellar. No, not all of the recent movies they’ve put out have been awful, but enough of them have been so that I do shudder a little whenever I get a new title from them in for review. Such was the case when I got Deadshadows, a movie I’ve never heard of before, and I’m pretty well versed when it comes to horror movies. But then, it is a French film, and sometimes my global web misses a few flies. So was my apprehension warranted with this import or was I afraid of being disappointed for nothing? Well let’s find out.

One night a glowing comet slips out of a tear in space and time and does a flyby of Earth. On that night, little Chris’ parents die, although the hows and whys of it is always left vague. 10 years later and Chris is an IT tech support kind of guy who plays World of Warcraft online, surrounds himself with toys, and has more than a little fear of the dark. One night he screws up his courage, takes a chance, and goes out to a Paris party to hook up with a cute artist neighbor. As for the party, it’s to celebrate the return of the same mysterious comet as before.

Like many things in life, Deadshadows is a bit of a mixed bag. There’s plenty of good and bad to be had here. Some of the good are: there is more than a bit of Lovecraftiness here, with the unknown cosmic threat and everyone becoming horribly mutated tentacle monsters. There are some decent gore effects and many of the critters look like they could be kissing cousins with John Carpenter’s The Thing. There are some good fight scenes with Chris dual-wielding baseball bats to deal with the more human-like threats. This is also a short movie, at just an hour and hour and 14 minutes in length, and once it gets going, it doesn’t stop.

Now for the bad: despite being a very short movie, nothing really starts to happen until the 38 minute mark. Some of the CGI effects used to make those wonderfully wicked Thing–like horrors look very dodgy. Some of the dialog is B-movie bad, but who knows, maybe it sounds better in French? Lastly, the plot more than once hinges on some kind of contrivance that make no sense at all. I won’t name the parts here, I’ll leave them for you to discover should you watch this, but while some of them got me laughing, they weren’t bad enough to completely ruin my enjoyment of this movie.

The new Blu-ray from Scream Factory not only looks great, but comes with both the original French language track, and a new English dub. So yay for all you out there that hate to watch subtitled movies, although it also comes with those for those that want the original language experience. As for extras, it actually comes with more than what I would expect from an import. There is an interview with director David Cholewa that’s over 33 minutes long. There is also a three and a half minute featurette on the making of the special video effects, an unfinished video effect scene, and a very short collection of deleted scenes also heavy on the special effects.

Deadshadows is not a great film, but it’s not horrible, either. As I said, it’s a bit on the short side, with a good chunk of that not really doing anything. I would dare say this would be a much better short film than stretched out to feature length. The ending could be called ambiguous by some, but for me, it mostly fell flat. That said, it is a fun romp with some wicked looking creatures, there’s just not much more to it than that. For Francophiles and lovers of wonderfully weird monsters, consider this one mildly recommended.