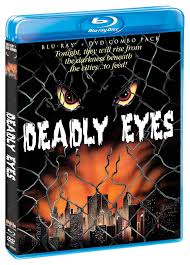 Yes, it’s the killer rat movie from 1982. The one also known as The Rats. The one based off of a James Herbert book. And yes, it’s the movie that James Herbert later disowned and it’s the one where they dressed up dachshunds in costumes to play the large vermin. Yes, it’s that movie. An odd choice for Scream Factory to put out on Blu-ray, but was it a bad choice? Well hide the cheese and grab your industrial sized box of Rat-B-Gone, we’re going eye to eye with some Deadly Eyes.

Here we have grain contaminated with steroids that leads to rats the size of small dogs living in the subway tunnels of Toronto. Paul, a college professor and Kelly, a feisty health inspector, not only become a couple during the course of the movie, but team up to investigate the rash of rat attacks plaguing the city.

Highlights to this movie are the cutest giant killer vermin you ever did see, especially when they scamper after their prey. Scatman Crothers as a testy all around maintenance guy who gets munched on, but who I like to believe is Dick Hallorann, working his winter job when The Overlook Hotel is closed. There are some truly laugh-worthy rat puppet heads used for close-ups of the critters chewing through fences, or people. And something that you would not see in a movie today: a baby that becomes rat snacks. Now don’t get me wrong, in the real world I am not an advocate for baby eating, but if a movie calls for it… Well, let’s just say that I was sure this film wouldn’t go there, and was surprised when it did.

Low points of Deadly Eyes include Professor Paul being a chick magnet, even with a cute little co-ed, and sorry, but I’m just not buying that. There are also long gaps where nothing much happens, and a general feeling of been there, seen that, to this entire movie. No, it’s not really bad, and it never does anything wrong, but it never does anything new or all that good, either. It is the same paint-by-numbers nature runs amok movie that you’ve see a hundred times before and since. Deadly Eyes biggest sin is the fact that it’s just sort of ho-hum.

While the movie may be meh, the new Blu-ray/DVD combo from Scream Factory is anything but. First, let me say that this film looks great, much better than the old VHS of this that I had last seen. That was so dark at times that it was impossible to see what the rat-hounds were doing. Not so with this new, upgraded version. As for the extras, there are a bunch of interviews actors Lisa Langlois, Lesleh Donaldson, and Joseph Kelly. Screenwriter Charles Eglee, art director Ninkey Dalton, and special effects artists Allan Apone and Alec Gillis, two of the men who put the little dogs into the rat suits, also give interviews here.